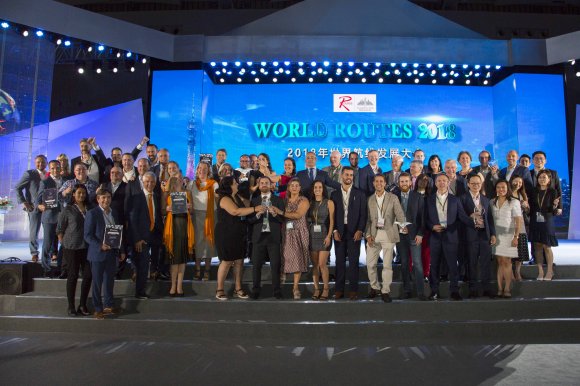 The annual World Routes Marketing Awards took place at the China Import and Export Fair in Guangzhou last night. Nominated and judged by airlines, the ceremony is highly regarded in the aviation industry for recognising the outstanding marketing services that have supported the launch of new air routes or the development of existing services.

Brussels Airport was named the Overall Winner and also won the 20-50 Million Passengers category. It was recognised for passing the 25 million passenger mark for the first time in the airport’s history, despite being located in the most competitive region of Europe. Our judges recognised it has a comprehensive marketing plan across all B2B and B2C channels.

The Individual Award for Outstanding Contribution to Route Development was won to Gabriel Schmilovich of Vueling, who was nominated for the second year in a row and commended for his work in leading a team whose goal was to drastically improve punctuality and the operational model without affecting the productivity or profitability of the company. Vueling achieved an OTP of +18 percent and were given the title of ‘Most punctual LCC’ according to OAG.

Gabriel Schmilovich said: “I lead a team of young, passionate people and this is for them. In the last few years, Vueling has grown very quickly but in a profitable way. At the same time we have developed honest and worthwhile relationships with our airport partners and I believe this award is recognition of that.”

Cork Airport, which took home the award for an airport Under 4 Million Passengers was congratulated for its third consecutive year of growth. 2017 saw the launch of the airport’s first ever intercontinental route, with a new year-round Norwegian service to Boston/Providence. Norwegian’s CEO Bjorn Kjos said that the strong marketing executed by Cork Airport for both its inbound and outbound markets has since ensured the route's success.

Albrecht Dürer Airport Nürnberg was awarded the prize for an airport of 4-20 Million Passengers, having seen growth of 20 percent in 2017/18 despite the demise of Air Berlin. This was achieved through a customised approach to airline needs and building trusting relationships with their airline partners. The airport has adopted a radical new method to developing new markets and as a result have achieved 36 percent passenger growth over the past five years.

The award for an airport with Over 50 Million Passengers was won by Singapore Changi Airport, which has truly had a milestone year - passing the 60 million passenger mark in 2017 and seeing double-digit growth from China and India (12 percent and 16 percent respectively), gaining 11 new city links, launching the world’s longest LLC carrier route with Norwegian to London Gatwick, as well as opening their fourth terminal in August 2018 and being named SkytraxWorld’s Best Airport Award for 6th consecutive year.

The Destination award was won by the Canary Island Tourist Board – Promotur, which oversaw a record 151 new routes in 2017. This was achieved this through working with the Spanish Government, collaborating with airlines and tour operators and intense marketing activity, all backed up by a significant flight development fund.

Airports and individuals were shortlisted either though the number of airline votes they received via Routesonline or by achieving passenger and seat capacity growth based on schedules data were asked to prepare a submission to be judged by a panel of airline representatives. The airline judges study the submissions and provide scores against a criteria - their combined scores determine the winners.

The judges this year were: