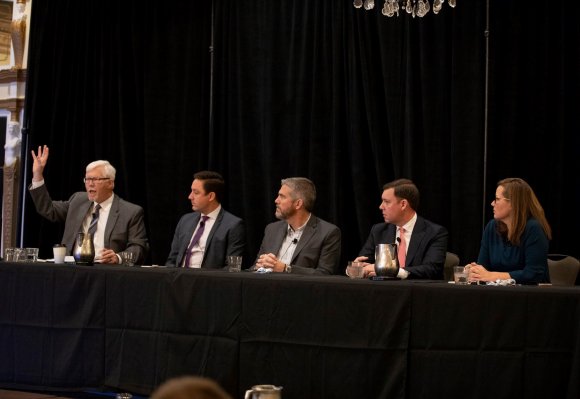 Airline consolidation is hurting profitability across the aviation and tourism sectors, one of North America’s leading industry figures has said.

According to Matthew J Cornelius, vice president, Air Policy, ACI North America, the trend is “leading to reduced service” and contributing to some airports becoming unviable.

Cornelius was addressing the audience of the inaugural TakeOff conference, which was held in Memphis, Tennessee and brought together small North American airports with airlines to discuss current and future air service.

“Consolidation is one of the most pressing issues facing aviation,” he said. “It’s making it harder for the travel and tourism industry to make money.

“Small and medium-sized airports are bearing the brunt of this; some airports have lost connectivity altogether.”

However, fellow panellist Kirk Lovell, director of air service and business development at Myrtle Beach International Airport, argued that long term the trend could be beneficial for the industry.

“The long-term outlook is hopefully good,” he said. “Airlines have cut service, which can be extremely painful to those airports and communities affected, bit it’s better for their pocketbook.

“The makes airlines better able to weather the next storm; we don’t know when that will be, but we know it’s coming."

Lovell also warned about the effect of carriers upgauging, which “puts stresses on facilities” at airports: “Where are we going to get the funding to deal with this?”

“We need to bring in more stakeholders”, he said. “Hotels, chambers of commerce and other organisations need to come together and make their point strongly in Washington.

“When they work together like that, they can outnumber the airlines and make them look small."

Panel moderator Scott A. Brockman, president and chief executive officer at TakeOff host Memphis-Shelby County Airport Authority, rejected the idea that privatisation could help to tackle the financial issues, however.

“I don’t need some company to come here and buy my airport,” he said. “That would just create unemployment.”

“Small airports are the backbone and future of the aviation industry in North America,” he added. “Without spokes there can be no hubs.”