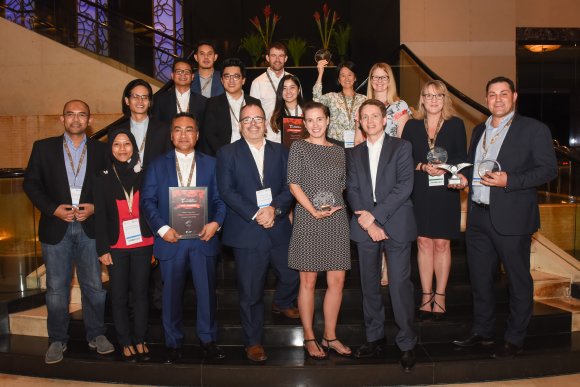 Brisbane Airport (BNE) has been named the overall winner at the annual Routes Asia Marketing Awards after earlier winning the Over 20 Million Passengers category.

BNE is owned and operated by the Brisbane Airport Corporation (BAC), which has committed billions of dollars of investment in the airport, including a new runway due to open in 2020.

The airport was recognised for taking a sophisticated analysis-driven and creative partnership approach to its marketing, including offering significant support for airlines’ growing capacity, frequency, or gauging aircraft and an event TV campaign featuring Catriona Rowntree, a well-known Australian TV host and travel reporter.

The annual Routes Asia Marketing Awards took place at the Radisson Blu Hotel, in the heart of the City of Cebu, Philippines.

Nominated and judged by airlines, the annual awards are highly regarded in the aviation industry for recognising the outstanding marketing services that have supported the launch of new air routes or the development of existing services.

Jim Parashos, head of aviation business development airline and retail management at Brisbane Airport, said: “It’s a long-burn process, but I think tonight is the culmination of two years of really hard work.

“We’ve had seven new airlines during that time and up-gauges from existing carriers, which is equally important but often forgotten about.

“We operate in a very competitive environment, not just in South East Queensland but the whole of Australia, so you have to continue to innovate and go above and beyond for your customers. We don’t do it for the awards, but this is fantastic recognition for what we’ve achieved.”

Winner of the Under 4 Million Passengers award was Sihanouk International Airport who were congratulated for creating an impressive number of new routes to Chinese cities, opening up their region of Cambodia to a new, and booming, travel market.

Another Australian airport went home with an award after Perth Airport were named winner in the 4-20 Million Passengers category. After a fantastic year, the team at Perth Airport were commended for attracting new airlines and adding capacity to existing airlines.

Noticing a slow in growth from their local catchment area, the team turned their attention to focus on unserved inbound routes, including Tokyo Narita, London Heathrow and Hobart, Tasmania. The team also worked with airlines to increase capacity on existing routes from Singapore, Doha, Jakarta and Kuala Lumpur.

Following in the success of Brisbane Airport, the destination award was won by the city’s Economic Development Board, Brisbane Marketing.

In 2018, Brisbane experienced record growth from international visitors with a 9.7 percent year on year increase in international visitors and 20.5 percent growth in overnight visitors. Brisbane Marketing had previously undertaken activity in New Zealand, China and South Korea, and these source markets lead the way with visitor numbers up 13 percent, 15.8 percent and 4.3 percent respectively.

Judges commended Brisbane Marketing on their cooperative approach as they partnered not only with the Brisbane Airport Corporation to secure and support their new routes, but further partnered with airlines to deliver supporting marketing activity, such as hosting a trade educational session and dinner in Shenzhen which Brisbane’s Lord Mayor attended to reiterate the support that Brisbane extends to Shenzhen as sister cities.

Brisbane Airport will go through to compete for the title of overall winner at the World Routes Marketing Awards which will take place in Adelaide on the 23 September.