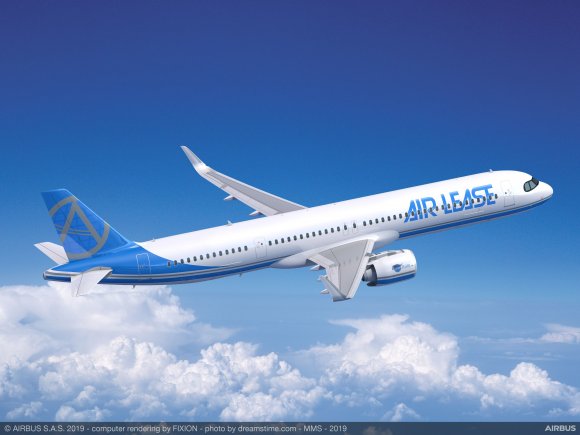 Airbus made the decision on the back of several launch orders that are expected to be unveiled at the show later his week. The first publicly announced commitment came from Air Lease Corporation (ALC).

The lessor signed a memorandum of agreement for 27 aircraft. The company also committed to buying 23 A321neos that can be converted to the LR version of the aircraft and 50 A220-300s.

ALC will receive the first A321XLR “at the back end of 2023” according to executive chairman Steve Udvar-Hazy. That would be around two years ahead of the earliest conceivable entry-into-service date of the proposed Boeing new mid-market airplane (NMA).

ALC chief executive John Plueger sees “a potential for 50 new airlines [ordering the XLR] in the next five years at least.” The aircraft will be a “formidable competitor” for the planned NMA, he said. “And it will be available many years earlier."

Airbus is using the A321neo variant as a tool to make the NMA’s addressable market as small as possible. The launch is now adding pressure on Boeing to move ahead with the NMA to avoid losing too much of the segment.

Airbus chief commercial officer Christian Scherer pointed out that ALC is “a reference for many [airlines] in their fleet decisions.”

Unlike Boeing, Airbus has no plans for an all-new aircraft in market niche but plans to pitch the A321LR/XLR and the A330neo to airlines.

The A321XLR differs in some ways from the baseline A321neo and the A321LR. Its maximum take-off weight is increased from 97 to 101 tonnes, the gear will be strengthened and Airbus is developing single-slotted flaps to preserve the take-off performance of today’s aircraft. Engine thrust requirements are not changing according to Airbus although Hazy hinted that the engine manufacturers will “have to make some improvements”.

The main change to the aircraft’s configuration is the addition of an integrated rear centre tank (RCT) for increased fuel volume. Airlines also have the option to add another auxiliary fuel tank forward of the wing should missions require it.

The aircraft will be capable for flying up to 4,700 nm in a configuration for around 200 passengers. That is around 700 nm more than what the LR offers. It puts the aircraft into the same range territory as the 757. The A321neo is certified for up to 244 passengers and is to burn 30% less fuel per seat than the Boeing 757 which is currently used on thin long-haul routes by many airlines across the Atlantic

Scherer said the RCT will hold an additional fuel volume equivalent to four auxiliary fuel tanks but will only occupy the space of two and weigh as much as one of the removable tanks. The arrangement, he pointed out, is liberating space for cargo. The RCT will weigh “a few hundred pounds” and will therefore not add a lot of unnecessary structural weight for the aircraft on shorter missions where the additional capabilities are not required.

The XLR can do missions like Sapporo-Delhi from the Middle East to Bali, from Japan to Australia, Rome to New York or Miami to Buenos Aires, Scherer pointed out.