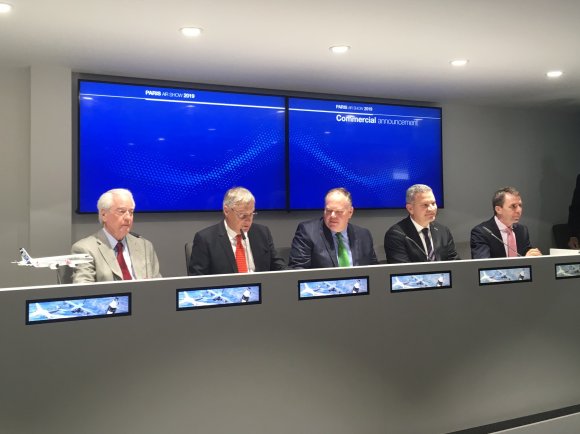 US private equity firm Indigo Partners has signed a commitment for 50 of Airbus' A321XLR long-range aircraft. The Memorandum of Understanding includes the conversion of 18 existing A321neo family orders, plus 32 new orders for the single-aisle variant.

Indigo has major stakes in four ultra low-cost carriers (ULCCs): Wizz Air, Frontier, JetSMART and Volaris. Twenty of the A321XLRs will be allocated to Wizz Air, 18 to Frontier and 12 to JetSMART.

The four carriers now operate a combined 295 Airbus aircraft and have a huge 636 on order.

“We are big fans of the Airbus product,” Franke told reporters at the Paris Air Show. “As we looked at the XLR and the opportunity it would provide to the network of these three carriers, we became convinced this was the aircraft that we needed to add to the portfolio.

“We are anxious to see the airplane in service. It expands the network opportunity for our carriers dramatically and that’s important strategically to the airlines relative to the market and the competition.”

Chilean carrier JetSmart’s CEO Estuardo Ortiz added the aircraft offers a “tremendous opportunity” to open routes not possible before, with the US, Mexico and destinations across the Caribbean now within range.

“These are markets which are very attractive and have high potential for stimulation,” Ortiz said.

József Váradi, the CEO of Wizz Air, echoed the comments of his fellow chief executives, saying the aircraft type gives the Central and Eastern Europe airline an opportunity to extend its network.

“If you look at our network, it spans the Canary Islands to Astana [Nur-Sultan], Reykjavik to Dubai. It’s a huge geography and we believe the XLR will bring unique opportunities to extend the operating model.”

The A321XLR was launched on Monday and has already secured 36 orders from Qantas, up to 28 from International Airlines Group and 31 from Cebu Pacific among others.

Airbus chief commercial officer Christian Scherer expressed his delight at how well the model has been received so far: “It’s had a great take off so far and is now putting on the afterburners.”