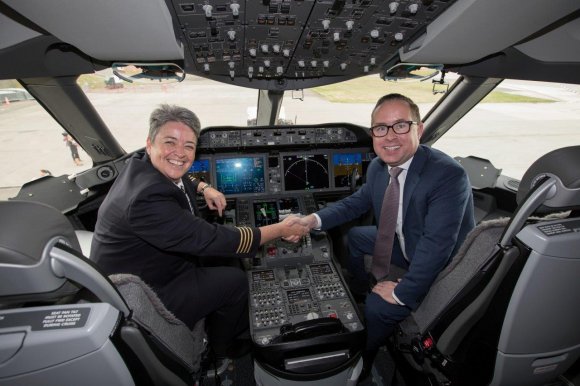 Australia’s flag carrier Qantas will make a decision whether to push ahead with Project Sunrise plans to open routes the east coast of Australia to London and New York before the end of the year, according to chief executive Alan Joyce.

The three flights over three months will use new Boeing 787-9s and re-route their planned delivery flights. Instead of flying empty from Seattle to Australia, the aircraft will simulate two Project Sunrise routes – London and New York to Sydney.

Each flight will have a maximum of 40 people, including crew, in order to minimise weight and give the necessary fuel range. Qantas said carbon emissions from the flights would be fully offset.

Joyce said Boeing and Airbus have aircraft “that can do the job” (A350 and 777X) and the manufacturers’ best-and-final offers were “on the table”, including a “compelling offer” from Boeing to deal with any delay to the 777X.

“We have a high-level design of what our cabins would look like. And we’re working with regulators to allow flights beyond 20 hours,” he added.

“There’s plenty of enthusiasm for Sunrise, but it’s not a foregone conclusion. This is ultimately a business decision and the economics have to stack up.”

The on-board research is being designed in partnership with Sydney University’s Charles Perkins Centre and Monash University in conjunction with CRC for Alertness, Safety and Productivity.

Passengers in the cabin – mostly Qantas employees – will be fitted with wearable technology devices and take part in specific experiences at varying stages of the approximately 19 hour flights.

Joyce said: “Flying non-stop from the East Coast of Australia to London and New York is truly the final frontier in aviation, so we’re determined to do all the groundwork to get this right.

“No airline has done this kind of dedicated research before and we’ll be using the results to help shape the cabin design, inflight service and crew roster patterns for Project Sunrise. We’ll also be looking at how we can use it to improve our existing long-haul flights.”

No commercial airline has ever flown direct from New York to Australia. Qantas has once flown non-stop from London to Sydney in 1989 to mark the entry into service of the Boeing 747-400. That flight had a total of 23 people on board and minimal internal fit-out in order to provide the range.

Longest flights in the world by distance (August 2019):