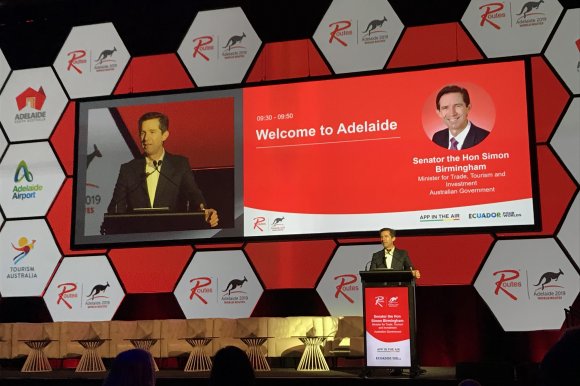 Speaking at the 25th world route development forum in Adelaide, Simon Birmingham said that 1 million Indian tourists are expected to visit Australia each year by 2030 but new air services are required if that demand is to be met.

“We’ve seen huge growth in arrivals from India - there has been five consecutive years of double-digit growth in both arrivals and spend in Australia,” he said.

“In the year to March 2019, arrivals reached a high of 342,000, representing a 15 percent increase in the last 12 months alone. Some projections estimate the number of Indian visitors to Australia is expected to grow to potentially around 1 million by 2030.

“However, growth in arrivals and visitors has not been matched with direct aviation services. Currently Air India is the only direct flight provider, with eight flights to Delhi per week.”

Birmingham said that 90 percent of Indian visitors to Australia therefore travel indirectly, adding there is “huge potential” for the addition of non-stop services. He therefore called on airlines and airports to increase the number of direct flights between Australia and India to meet the growing demand.

“Based on the predicted increase in tourism numbers to 2030, to meet the demand there will need to be growth of approximately 60,000 additional seats per year on average over the next decade. That’s equivalent to around 250 direct flights per year, or five extra flights per week.”

He said: “Japanese tourists spent A$2bn in Australia last year. It is a great case study in demonstrating the known link between aviation capacity increases and increases in international inbound tourism.”

The Japanese government has opened up 50 new slots at Tokyo Haneda ahead of the Olympic Games in 2020. Half of these will go to Japanese airlines, and the other half to foreign carriers.

Australia has been awarded two slots; Qantas has applied for both, while Virgin Australia is aiming to secure one.

“Over the past five years Australia has secured new air routes to Japan leading to growth in inbound tourism numbers following some previous years of decline,” added Birmingham. “The new slots will pave the way for a significant boost to a traffic between our countries.”

Birmingham went on to explain that the government is making huge investments to support aviation growth in Australia, including the under-construction A$5.3bn Western Sydney Airport.