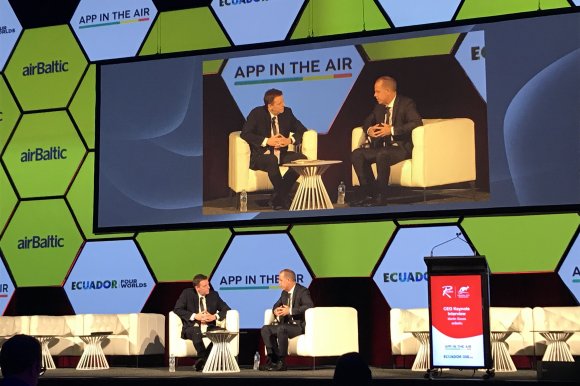 Martin Gauss said he expects more carriers will disappear over the coming years but believes the market will continue to remain fragmented.

OAG figures show that Europe’s top five airlines by capacity had a combined 30.0 percent share of the market in 2018. Contrast that to the US and the top five accounted for 75.2 percent.

“Consolidation is there and it’s coming more and more,” Gauss told delegates during a keynote interview at World Routes 2019 in Adelaide.

“However, it won’t be like in the US. I don’t think we’ll get to a point where there’s only five major airlines in Europe.

“In Europe there are a lot of states that are not as close together as in the US. So that means there is a lot of national interest about connectivity.”

After the high-profile demises of Air Berlin, Monarch and NIKI in 2017, the likes of Primera Air, Cobalt Air, Small Planet Airlines and NextJet were among the airlines to bite the dust in 2018.

Thomas Cook could also fall into administration over the coming days unless it finds £200m in extra funds needed to secure its future.

“Thomas Cook is obviously in very big trouble,” said Gauss. “There are airlines where two years ago no one would have thought there would be an issue. That’s where the consolidation will happen.”

Gauss joined Latvian carrier airBaltic eight years ago and has overseen a dramatic upturn in its fortunes. The hybrid airline underwent a restructuring programme between 2011 and 2015, but has grown strongly since 2016.

It has achieved positive net profits for six years and is partway through a transition towards a fleet wholly consisting of the Airbus A220-300 aircraft, for which it was the launch customer in 2016.