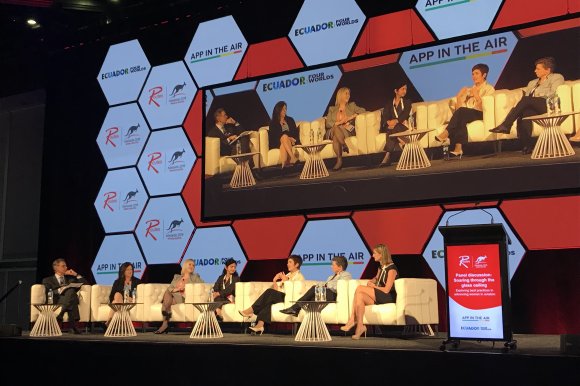 The discussion covered a wide range of issues, with panellists agreeing that a perceived lack of advancement in the industry and subconscious gender bias were among the biggest hurdles facing women.

“One of the questions that I often get asked is, ‘what's the key inhibitor to women progressing in aviation?’ The answer is men,” said McArthur.

“There are just so many men in aviation and so that does define the behaviours and the expectations of what it means to be a leader.”

According to figures from IATA, women hold just 3 percent of airline CEO positions worldwide. McArthur stressed that if there were more female role models in aviation, then more women would have the confidence to become female leaders.

“Women have to grow and develop the confidence that come naturally to a lot of men in senior leadership roles,” she added.

On the subject of whether organisations should be required to have quotas for women at board level, Argus argued that it should be a meritocracy.

“I think it just needs to be the right person for the job,” she said. “My fear is if you have quotas that are mandated, then you'll potentially push women into jobs that they aren't the best fit for.

“However, targets are needed because they put attention on an issue, but I don’t think they should be mandated to the point that you're forced to choose somebody based on gender.”

Stephanie Wear, director of economic and aviation development at Tenerife Tourism Corporation, agreed and said it should be about changing the discussion so that companies realise that their bottom line would be affected positively by promoting women to senior leadership positions.

“Companies at the end of the day have a bottom line and it’s their job is to make money. As soon as they realise that putting women in leadership positions will help them get there faster, that it's going to evolve a lot faster.”

Karen Walker, editor-in-chief of Aviation Week Network, said educating women from an earlier age about the opportunities in aviation is key to ensuring the industry becomes more diverse in the future.

“It’s fantastic that there are academies that are actively going out to schools and telling women about the opportunities to be pilots,” she said.

“If you get girls to think like that earlier, it will give them the confidence to thing that it’s a career they are entitled to.”