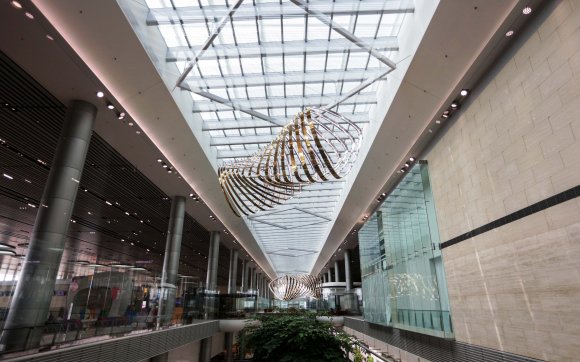 And CAG is now looking to even bigger things: the construction of a fifth terminal and incorporation of a third runway that could double Changi’s capacity in the 2030s, allowing it to take in another 50-70 million passengers.

Such big ambitions when an airport already has spare capacity are daring, but CAG senior vice president, corporate & marketing communications, Ivan Tan says planning well ahead for growth is the better way.

“We will hit capacity as we continue to grow,” he said from the company’s booth at World Routes. “It’s hard to do this type of construction work when you are operating at full capacity.”

The T5 project, dubbed Changi East, would be Changi’s largest ever and will likely cost tens of billions Singapore dollars, funded by CAG, the Singapore government and fees.

It would use a 1,080-hectare site adjacent to the existing airport that is about the same size as the current airport with its four terminals and two runways. The 4km third runway is already built, but is not connected to the airport and used only by military aircraft.

Changi East would also include cargo facilities and supporting aviation and ground infrastructure and would be one of the world’s largest terminals.

In the meantime, the newly-opened Jewel Changi Airport has become a destination and attraction in its own right. The massive glass and steel, temperature-controlled dome rises five storeys above ground and reaches five storeys below, comprising 110 restaurants, 170 shops, spas, a for-fee lounge and a hotel.

But that’s just the beginning. It also features a rainforest, the world’s tallest indoor waterfall, hedge and mirror mazes, a 50-meter canopy bridge and a nightly light and sound show.

When it opened in April, CAG anticipated between 40-50 million visitors per year, but the numbers have far exceeded expectations, with 24 million in the first ten weeks alone.

As of September, 33 airlines have “signed up”, meaning that passengers of those airlines can check in at the Jewel, submit their checked baggage and then are free to use the facilities. The Jewel is also proving popular with transit passengers. Singapore’s visa-free policy allows them to spend layover time in the Jewel between flights.

“Our mission with the Jewel is very much aligned with Singapore tourism,” Tan said.

“In South-East Asia you have a lot of [airport] options and this is a differentiator. Transit passengers can get a little taste of Singapore by visiting the Jewel. And passengers who have late night flights, but had to check out of their hotel rooms early now have a place to enjoy. It’s a true passenger experience. We see it as a tourism icon.”