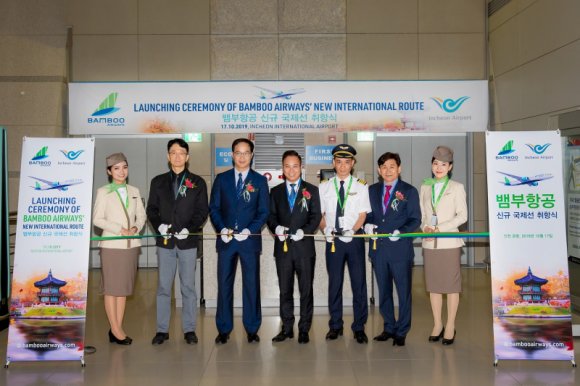 Bamboo Airways has become the latest carrier to begin scheduled service between Vietnam and South Korea, a market that has boomed in recent years and is becoming increasingly crowded.

The airline, which started operations in January this year, has launched a route between Danang International Airport and Seoul Incheon, operating once daily using A321neo aircraft. Flight time for the 2,979 km journey is about 4 hours and 20 minutes.

“We hope the route connecting Danang and Seoul along with the airline’s charter routes to Korea will play their part in meeting the travel needs of many people,” said Dang Tat Thang, the executive chairman of Bamboo Airways. “This is also a solid basis for the airline to expand its route map covering more destinations in Korea.”

On 15 November 2019, Bamboo Airways is planning to open another route between Nha Trang, coastal resort city in southern Vietnam, and Seoul. This will also operate one round trip per day using A321neo aircraft.

The airline’s entry to the market comes as Vietnam - South Korea capacity continues to accelerate, fuelled by rising leisure demand. There are currently about 224,000 two-way weekly seats between the two counties (w/c 21 October 2019), almost treble that of three years ago.

Data from OAG Schedules Analyser also shows that during October 2019, more than one million available two-way monthly seats are available for the first time ever.

Tourism between Vietnam and South Korea has blossomed since Vietnam introduced a visa waiver programme for South Korean passport holders in 2015. The country is now the second most popular international tourist destination for South Koreans after China.

The number of Vietnamese visiting to South Korea is also rising. There were about 450,000 visitors last year, up by 40 percent on the previous 12 months.

Following the launch of Bamboo Airways’ route between Danang and Seoul, the Vietnam - South Korea market is now served by 11 airlines. Low-cost carriers currently account for about 56 percent of capacity.

OAG data for w/c 21 October 2019 shows that Vietjet has the largest share of the market, accounting for 18.8 percent of the total number of seats on offer. Korean Air is second on 17.2 percent and Asiana Airlines third on 13.6 percent.