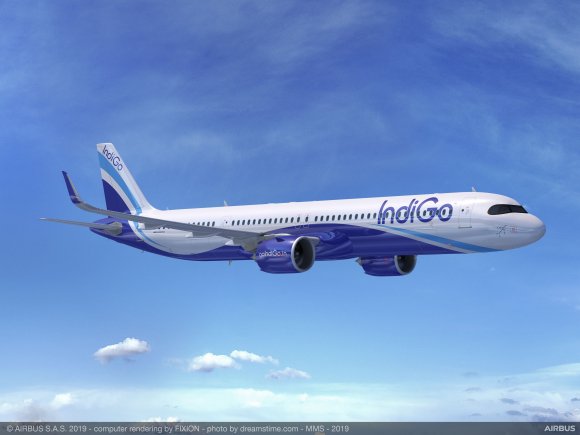 Indian low-cost carrier IndiGo has placed a firm order for 300 A320neo family aircraft, marking one of the largest aircraft orders Airbus has received from a single airline operator.

The latest order comprises a mix of A320neo, A321neo and A321XLR aircraft and will take the carrier’s total number of A320neo family orders to 730.

Ronojoy Dutta, IndiGo’s chief executive, described the deal as an “important milestone” and would further strengthen air connectivity in India, as well as boosting economic growth and social mobility.

He added: “India is expected to continue with its strong aviation growth and we are well on our way to build the world’s best air transportation system, to serve more customers and deliver on our promise of providing low fares and a courteous, hassle free experience to them.”

Since its first A320neo aircraft was delivered in March 2016, its fleet of A320neo family aircraft has grown into the world’s largest with 97 A320neo aircraft, operating alongside 128 A320ceos.

Guillaume Faury, Airbus’ chief executive, said: “We are grateful for this strong vote of confidence as this order confirms the A320neo family as the aircraft of choice in the most dynamic aviation growth markets.”

The A321XLR, unveiled at the Paris Air Show 2019, has a range of up to 4,700nm, with 30 percent lower fuel burn per seat compared with previous generation competitor jets.

“As we spread our wings and add more destinations, we need to extend the range of our operations and that is why we have added the A321XLR aircraft to our aircraft order,” Dutta added in an email to staff.  “We have more growth opportunities than we can meet with our existing fleet of aircraft.”

The addition of more fuel-efficient and longer-range aircraft will enable IndiGo to expand its network beyond its traditional markets. The airline added its first European route in March 2019, with a twice-daily Delhi – Istanbul service, and is understood to be mulling the launch of flights to the Georgian capital of Tbilisi from next year.

The route to Istanbul, which IndiGo operates using 182 seat A320 and 222 seat A321neo aircraft in all-economy class, came after it signed a codeshare agreement with Turkish Airlines.