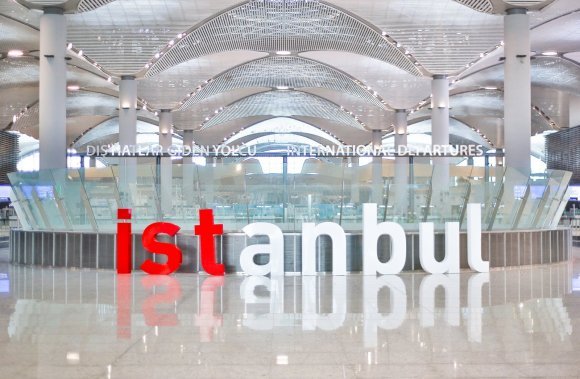 More than 41 million passengers have flown to and from Istanbul Airport on 256,521 flights since it opened a year ago, according to figures released by Turkey's transport and infrastructure minister Cahit Turhan.

The new $12bn aviation hub in the north-west of the city has so far served some 9.87 million passengers on domestic flights and almost 30.6 million passengers on international flights. Covering an area of 30 sq miles close to the Black Sea coast, it now links 130 destinations in 60 countries.

A total of 70 airlines have also taken off from Istanbul Airport since it opened. They include nine new carriers – Ethiopian Airlines, Nouvelair, IndiGo, Air Albania, Sichuan Airlines, China Southern, Tassili Airlines, UR Airlines and the latest, Transavia France.

The official inauguration of the new airport took place on 29 October 2018 – the 95th anniversary of the founding of the Turkish Republic – following a 45-month construction period.

Istanbul Airport, a major project for Turkey’s president Recep Tayyip Erdoğan, now has a capacity of 90 million passenger per annum, rising to 200 million once future phases are completed by 2028. Development works are continuing under a four-stage programme, with the construction of a second terminal building forming part of the plans.

Although the eventual capacity for Istanbul Airport is huge – and would place it alongside Beijing Daxing in terms of size should the Chinese airport also be fully expanded – can it attract enough services to ensure it achieves its ambitions?

According to figures from OAG Schedules Analyser, Istanbul Airport has a strong home-based carrier and alliance presence, scoring well when compared with its Middle East rivals. The strength of Turkish Airlines and Star Alliance therefore allows for better connecting schedules.

Looking at passenger numbers, the overall aviation growth of Istanbul as a city also bodes well. Atatürk Airport increased traffic by 32.4 percent between 2013 and 2018, rising to 67.98 million last year. The year-on-year rise between 2017 and 2018 was also 6.7 percent.

Sabiha Gökçen International Airport, on the eastern side of the Istanbul, has also expanded at an impressive rate since it opened in 2001, boosted by presence of low-cost carrier Pegasus Airlines. In 2018, the airport handled 34.1 million passengers, up from 31.3 million during the previous 12 months.

Between them, the two airports therefore handled almost 103 million passengers in 2018, a sharp rise from the combined total of 70.1 million five years earlier.

In the first nine months of 2019, the opening of the new Istanbul Airport does not appear to have dented the growth of Sabiha Gökçen. Between January and September, the airport handled 26.7 million passengers, a rise of 3 percent year-on-year.

A report published today (31 October 2019) by travel analytics business ForwardKeys has also found that connectivity of European cities is continuing to increase - and the city which is increasing connectivity the most is Istanbul.

For the fourth quarter, Istanbul will grow at the third fastest rate in Europe, up by 17.0 percent, behind Warsaw, up 21.3 percent, and Lisbon, up 19.0 percent. Looking at the rankings for intra-European capacity growth, Istanbul ranked fourth during quarter three of 2019 and fifth during the fourth quarter.

Olivier Ponti, VP of insights at ForwardKeys, said: “While cities like Dubrovnik, Florence, Helsinki, Seville and Warsaw are showing significant increases in capacity, they have done so from a relatively small base.

“The cities, which really stand out for increasing capacity from a larger base are Lisbon, Vienna and, most of all, Istanbul, which features in the top seven cities for long haul and intra-European capacity growth in both Q3 and Q4.

“In the case of Istanbul, one has to attribute much of the success to the completion of its new airport, to the strength of Turkish Airlines and to the rise of two low-cost carriers, Pegasus and Atlas Global.”