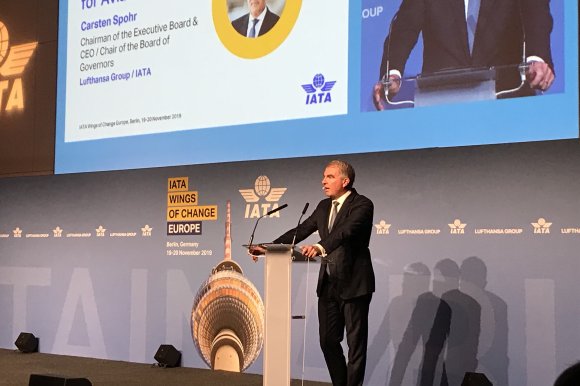 Speaking at IATA’s Wings of Change Europe event in Berlin, he said that the industry has committed to reducing total emissions to half the 2005 level by 2050, in line with the goals of the Paris climate agreement.

Spohr explained that in the short-term this is being addressed by airline investment in modern aircraft, which will cut average emissions per passenger journey.

He added the Carbon Offsetting and Reduction Scheme for International Aviation (CORSIA) is also being implemented, which is forecast to mitigate around 2.5 billion tonnes of CO2 and generate more than $40bn in climate finance between 2021 and 2035.

However, Spohr said there must be a joined-up approach by governments across Europe, in particular to advance the Single European Sky initiative and invest in sustainable synthetic fuel.

“The governments need to finally get their act together on the Single European Skies,” he said.

“It takes political decisions – brave decisions – to reduce the CO2 emissions in Europe by 10 percent. That must be the biggest European project to reduce CO2 and for whatever reason that is not moving forward. The next 12 months will be decisive for its implementation.”

The long-awaited Single European Sky initiative aims to increase the efficiency of air traffic management and air navigation services by reducing the fragmentation of European airspace.

Spohr added: “Long term we can reach up to 90 percent of CO2 emission reductions with synthetic fuels. As an engineer and pilot, this is the only vision I see right now to becoming CO2 neutral in aviation in the foreseeable future.”

Alexandre de Juniac, IATA’s director general and CEO, stressed that governments most focus on reducing emissions rather collecting taxes. He said recent aviation taxes being proposed in Germany would approximately double the taxation on passengers, making it harder for people on lower incomes to fly.

“Taxation is a crude and inefficient method for covering environmental costs. And it picks a fight with the wrong enemy. The goal must not be to make flying unaffordable,” de Juniac said.

“Neither should it be to cripple industry and tourism which creates jobs and drives development. Flying is not the enemy - it is carbon. Government policies should aim to help people fly sustainably,”