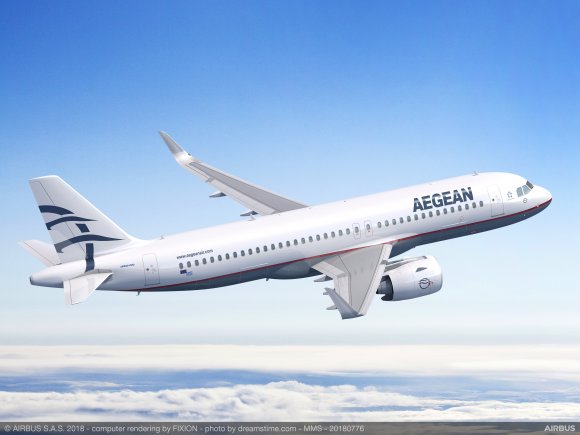 Greek carrier Aegean Airlines is planning 7.8% capacity growth in 2020, supported by the introduction of six initial Airbus A320neo-family aircraft scheduled to arrive during the year.

“With 11 new routes, 1.5 million additional seats and 19.2 million seats in total, and of course with the addition of the first six A320neo family aircraft to our fleet, we create a new growth potential for our company,” Aegean Airlines CEO Dimitris Gerogiannis said.

The Greek expansion will focus on Aegean’s Athens home hub, a strengthening of activities from Thessaloniki and a new base in Corfu, including three brand new destinations for the airline: Birmingham (UK), Paphos (Cyprus) and Bilbao (Spain).

Corfu will become Aegean’s eighth base in Greece and Cyprus, with new scheduled services to Paris, as well as 12 charter destinations. The new base will add 95,000 seats compared with the previous year.

Thessaloniki will see a 25% capacity increase, including eight new destinations—six international and two domestic—supported by a new 500m2 lounge.

Growth at Athens will mainly stem from frequency increases on existing routes, as well as flights to four new destinations: Bilbao, Birmingham, Nuremberg (Germany) and Paphos.

The 2020 additions will take Aegean to a network of 155 domestic and international destinations, served by 65 aircraft.

Aegean’s first A320neo-family aircraft is expected to arrive during the first half of 2020. By year-end, Aegean is expecting to operate six of the type.