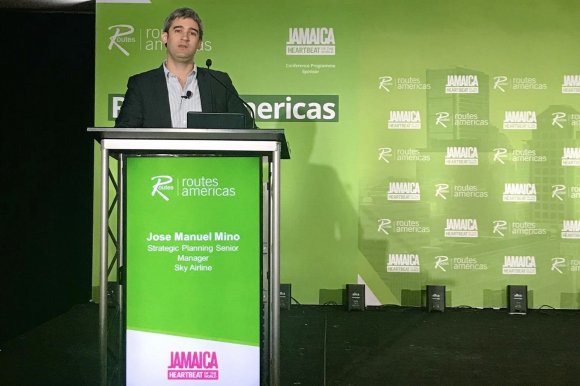 Chilean carrier Sky Airline plans to start service between Lima, Peru, and Miami this year, delegates at Routes Americas 2020 in Indianapolis have been told.

Strategic planning senior manager Jose Manuel Mino said the route is one of three international services being launched from Lima in the coming months.

On April 2, Sky will begin flying 4X-weekly to Punta Cana in the Dominican Republic, and on April 15 it will begin a 3X-weekly service to Cancun in Mexico. The Miami route is slated to open before the end of the year.

According to data from OAG Schedules Analyzer (w/c Feb. 3, 2020), the ultra-LCC is now the second-largest player in Peru’s domestic market, with a 16.4% capacity share of departure seats. LATAM Airlines Group remains the largest, with a 64.6% share, and Viva Air Peru is third with 11.8%.

“Since we first announced plans to start in Peru, both LC Peru and Peruvian Airlines have ceased operations, so that gave us a piece of the market to move into,” Mino said. “Viva Air Peru also had aggressive international expansion plans from Peru, but those plans seem to be on standby. Over the last year the landscape has completely changed.”

Mino explained that Sky will become an all-Airbus A320neo-family operator by April this year and will receive five A321neos in 2021. In late 2019, the carrier also signed a purchase agreement for 10 A321XLRs.

Mino said the A321XLRs will be a “game changer” when they enter its network by the end of 2023, enabling the airline to operate much longer routes.

He added: “From Santiago it gives us the opportunity to fly nonstop to the Caribbean and Miami. From Lima, we’ll be able to fly to New York, San Francisco, Toronto and even here, to Indianapolis. The XLR will allow us to lower fares and stimulate traffic on such routes.”