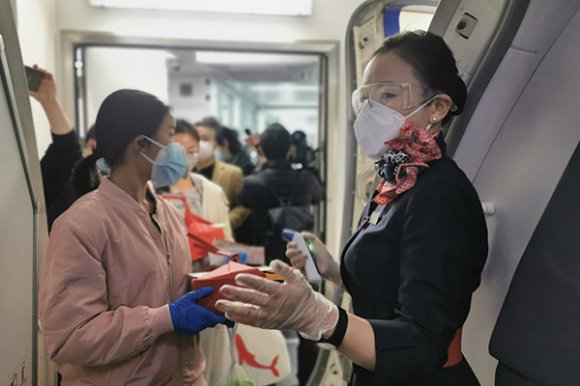 China’s Wuhan Tianhe Airport (WUH) has reopened its gates to scheduled commercial operations, marking the end of a 76-day citywide lockdown and the resumption of service to the airport located in Hubei province where the COVID-19 pandemic first started in late 2019.

On April 8 China Eastern Airlines Flight MU2527 departed WUH for Sanya Airport (SYX) on China’s Hainan Island carrying 42 passengers, the first outbound flight allowed in over two months. There were 225 inbound and outbound flights scheduled for April 8 to over 50 cities in China, including Chongqing, Kunming, Qingdao and Shanghai, with an estimated passenger volume of 11,000.

Coronavirus control measures are still in place at WUH. Temperature screening stations are set up at the terminal entry, at security and at the boarding gates, and a disinfection process takes places at least twice a day. Social distancing measures are also implemented, and the airport has increased ventilation, allowing more fresh air to be circulated into the building.

Wuhan became the first city in the world to enter a lockdown on Jan. 23 as COVID-19 began to spread in the surrounding Hubei province. During the period of lockdown, numerous charter flights were operated by state-owned carriers to ferry medical personnel and supplies to the city, as well as repatriation flights by various foreign governments.

China has apparently been able to gain control of the outbreak, seeing a sharp decline in domestic cases. New reported cases have mostly been imported from abroad, prompting the Chinese government to ban foreigners from entering the country and reducing the frequency of international flights to just one per week per airline. There were no new cases of COVID-19 reported in Hubei province on April 7.