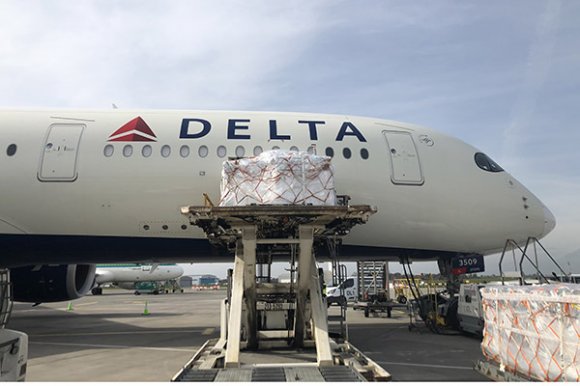 Delta Air Lines is resuming two passenger services to Frankfurt (FRA) and London Heathrow (LHR) from May 21 for the first time since flights were suspended because of the COVID-19 pandemic.

The SkyTeam alliance member said that although the flights will be available for passengers, the demand for the cargo capacity is really driving the return of the routes. Service to FRA and LHR will operate 3X-weekly from Atlanta Hartsfield-Jackson (ATL) and Detroit (DTW) respectively.

“Keeping global supply chains open is more important now than ever and these new services will enable suppliers to meet the needs of their customers,” Delta Cargo vice president Shawn Cole said.

“We’re receiving daily requests for shipments of medical supplies as well as goods that keep businesses in operation. By also opening these services to passengers, we can facilitate essential travel between the UK, Europe and United States.”

Delta plans to transport cargo between Los Angeles (LAX) and FRA, via ATL, and between Chicago (ORD) and LHR, via DTW, increasing the shipping opportunities for customers.

Earlier this month, the carrier increased its cargo-only flights to Seoul Incheon (ICN) to ATL and LAX to daily operations following increased demand to transport medical supplies and other goods from Asia to the US. It has also added another daily flight between Shanghai (PVG) and ICN, bringing the total to three.

On Thursday (May 14), Delta announced plans to retire its 18 Boeing 777s by the end of 2020 as a result of the COVID-19 pandemic. This followed the decision to accelerate the retirement of the MD-88 and MD-90 fleets to June.

“The 777 has played an important role with Delta since 1999, allowing us to open new long-haul markets and grow our international network as we transformed into a global airline,” Delta CEO Ed Bastian said in a memo to staff.

“However, parking this fleet will provide significant cost savings over the next several years. Delta is currently burning about $50 million every day, and steps like this help us stem the bleeding, in an effort to safeguard Delta jobs and our future.”