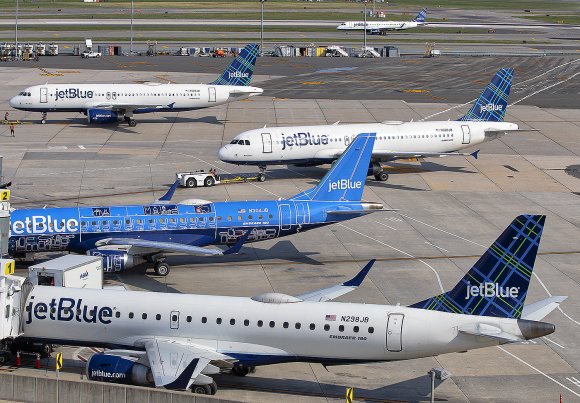 Beginning in October, New York-based JetBlue will shift nearly all its existing service from LGB to LAX, along with crew and maintenance bases. The carrier is initially planning to operate more than 30 daily flights between LAX and 13 destinations, seven of which will be transferred from LGB, including routes to Austin (AUS), Seattle (SEA) and San Francisco (SFO). Left out of the mix is its LGB-Portland, Oregon (PDX) service, which will be canceled.

The strategic realignment comes as JetBlue plans to build out Los Angeles as its sole West Coast focus city, with LAX serving as its primary base of operations in the Greater Los Angeles area. Over the next five years, JetBlue will “embark on a strategic expansion” at LAX, with plans to operate as many as 70 daily departures from the airport by 2025. The company said the expansion will include “multiple new markets, both domestic and international, some of which have never had nonstop service to and from LAX.”

The move comes after American Airlines dropped LAX as an international hub, though American will still operate a fair amount of domestic flying from LAX.

“LAX is one of JetBlue’s most successful markets and offers the valuable opportunity to grow significantly both domestically and internationally while introducing our low fares on more routes,” JetBlue head of revenue and planning Scott Laurence said in a statement. “The transition to LAX, serving as the anchor of our focus city strategy on the West Coast, sets JetBlue up for success in Southern California.”

JetBlue has served LGB since 2001, and was at one point the largest operator there, with 32 daily departures to the Bay Area and Western US, as well as transcontinental service to Boston and New York. The airline has been gradually winding down its service there over the last several years, however, citing financial difficulties. Daily departures from LGB were reduced to 24 in 2019, and again to 15 in January, including cancellation of flights to California cities Oakland (OAK), Sacramento (SMF) and San Jose (SJC).

JetBlue plans to operate roughly half its year-ago schedule in July, due to the demand slowdown caused by the COVID-19 pandemic. The carrier has committed to cap load factors at 60% by blocking middle seats across its fleet of Airbus A320/321 and Embraer 190 single-aisle jets through July 31.