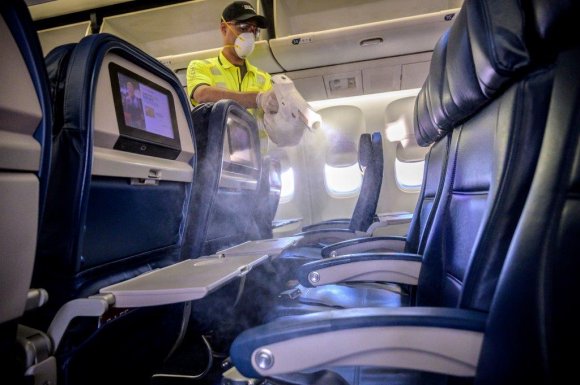 For the last few weeks, airline executives and analysts have warned of deteriorating booking trends in the US, as COVID-19 cases multiply, and state and local governments reinstate restrictions on travel and businesses.

Those predictions are now being borne out. During the week ending July 19, the number of travelers passing through the US Transportation Security Administration (TSA) checkpoints fell by 4% from the prior week, marking the first weekly setback for the country’s nascent demand recovery since passenger numbers bottomed out in mid-April.

Traffic volume has recently plateaued between 20% and 25% of 2019’s level, after falling by as much as 95% in May. The number of passengers screened during the week ending July 19 was down 75% year-over-year, slightly worse than the prior week’s result, which was down 72%.

“The demand environment remains challenging,” Delta CEO Ed Bastian said July 14 on the company’s 2020 second-quarter earnings call. “We were expecting a choppy recovery, and the past few weeks have shown that to be true. Now, we’re seeing demand growth flatten recently with the rise of COVID-19 cases.”

The stalled recovery has led many carriers to pause or scale back capacity growth planned for July and August. Hawaiian Airlines recently canceled plans to restore a host of mainland routes from Honolulu to cities including Boston, Las Vegas, New York and San Jose, after Hawaii Governor David Ige extended a 14-day quarantine order for all arrivals and postponed the state’s planned re-opening date for travelers who test negative for COVID-19.

Spirit Airlines also plans to trim its schedule in August, citing rising infection rates at its South Florida home base. The ULCC now plans to operate around 65% of 2019’s capacity, a marked reversal from July, when it flew over 80% of its year-ago schedule.

American Airlines, Delta Air Lines and United Airlines are offering a combined 49% of 2019’s domestic capacity in August, according to data from Bloomberg analyst George Ferguson. While that marks an improvement from the 37% they scheduled in July, all three carriers have indicated plans to pause their growth plans beyond Labor Day, which typically marks a drop-off in leisure travel and a pick-up in corporate demand. With no business travel recovery in sight, however, carriers are getting ready for a rocky autumn.

“Business travel is clearly going to be a 12-to-18-month lag [behind leisure], awaiting advances on the medical front, whether that be vaccines, therapeutics, or other reasons to think it’s safe for companies to put their employees back on the road,” Bastian said.

Ferguson sees revenues at American, Delta and United declining more than 60% in the 2020 third quarter (Q3) if the recent capacity cuts extend through September. “As leisure travel decreases in September, and if business travel doesn’t pick up, capacity cuts into autumn would—at best—remain unchanged from summer levels, or they could increase,” Ferguson wrote in a July 17 client note.

Even among the “Big 3,” significant differences exist in their approaches to scheduling capacity. American is still by far the most aggressive, with plans to offer 62% of 2019’s domestic schedule in August, up from 55% in July, according to Ferguson’s data. United plans to offer 47% of its domestic schedule for sale in August, while Delta will offer just 36% of 2019’s domestic capacity, once the 60% load factor caps placed across all its flights are accounted for.