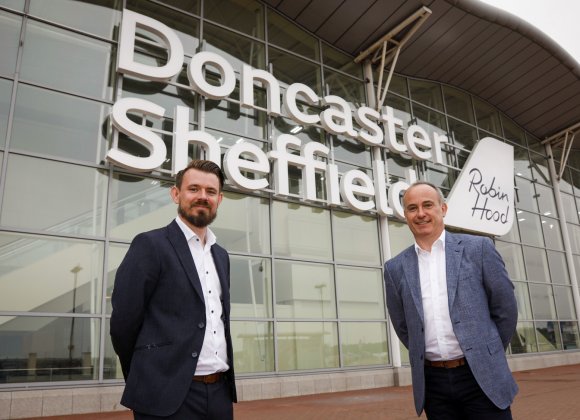 Wizz Air is opening a base at Doncaster Sheffield (DSA) and launching seven new routes—in addition to its existing network of 10 services from the UK airport.

The carrier’s UK-registered subsidiary will station one Airbus A320 aircraft at the airport in a move that will increase annual capacity by 150,000 departure seats. DSA becomes Wizz Air UK’s second base alongside London Luton (LTN).

“The creation of our second base in the UK is a major milestone for Wizz Air UK, and testament to both our long term commitment to serving the UK market and the strength of the Wizz Air business model, as we continue to expand our footprint during this challenging time for the industry,” Wizz Air UK MD Owain Jones said.

Wizz Air’s first flight from DSA took off more than 14 years ago, and since then the airline has grown to be the airport’s largest carrier. It accounted for almost 50% of capacity in 2019, OAG Schedules Analyser figures show, offering 367,000 departure seats.

With the creation of a base Wizz will launch seven new routes beginning Oct. 22, connecting DSA with Alicante (ALC) and Lublin (LUZ) 3X-weekly, as well as 2X-weekly flights to Faro (FAO), Kosice (KSC), Larnaca (LCA), Malaga (AGP) and Suceava (SCV).

DSA chairman Robert Hough welcomed Wizz’s expansion and said: “With strong performance there is now a real possibility for the base to grow from one aircraft initially to a multi aircraft base further broadening the range of routes available.”

With the allocation of this A320, Wizz now has 11 aircraft permanently based in the UK, and the addition of these new routes from DSA means the ULCC has almost 1.8 million seats on sale on its 107 routes from the UK for the remainder of 2020.

The creation of the base follows on from Wizz Air’s recent announcements of new bases in Bacău (BCM), Dortmund (DTM), Lviv (LWO), Larnaca (LCA), Milan Malpensa (MXP), Tirana (TIA) and St Petersburg (LED), and the launch of more than 200 new routes across the network since April 2020.