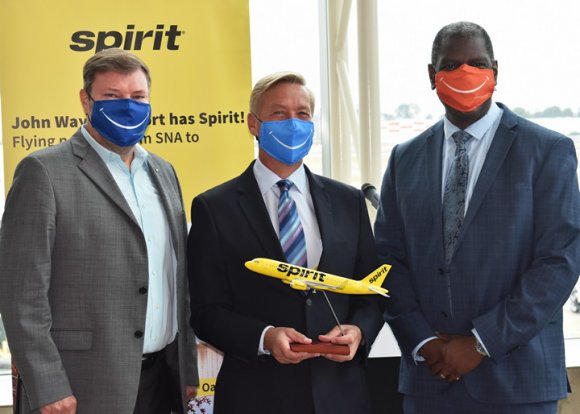 John Wayne Airport (SNA) has secured a new airline partner with Spirit Airlines set to begin service to the Californian airport this winter.

The Florida-based LCC plans to launch two nonstop routes from Nov. 17, connecting SNA with Las Vegas (LAS) and Oakland (OAK). Flights will operate 1X-daily to LAS and 2X-daily to OAK.

Spirit’s VP of network planning John Kirby said the routes would enable the carrier to offer single-stop, round-trip connections to 15 major US cities including Atlanta, Chicago, New Orleans, and Philadelphia.

The move to JWA is part of the airline’s ongoing expansion across the Golden State. In 2019, service began to Burbank (BUR) and Sacramento (SMF), in addition to Los Angeles (LAX), San Diego (SAN) and OAK.

According to data provided by OAG Schedules Analyser, Spirit will face direct competition on both new routes.

The latest schedules show for w/c Aug. 31 that Southwest is flying the route 3X-daily and Frontier is offering 4X-weekly flights. Delta has suspended the route.

On SNA-OAK, Spirit will go head-to-head with Southwest, which is currently operating 3X-daily flights. Pre-coronavirus, Southwest offered up to 7X-daily service.

Earlier this week, Spirit unveiled plans to raise $600 million through a private offering of senior secured notes due 2025. The notes will be secured by its ‘$9 Fare Club’ and ‘Free Spirit’ loyalty programs, in addition to the Spirit brand intellectual property.