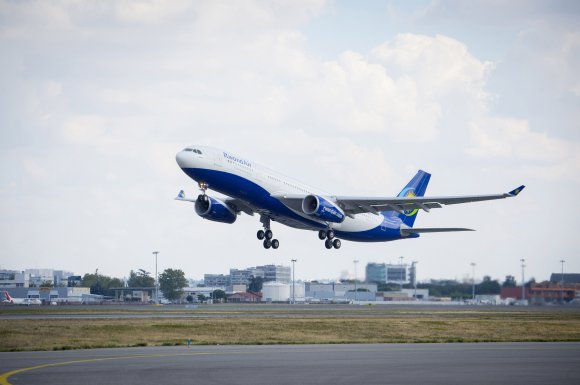 RwandAir will resume flights to Europe from next month, reinstating services to London and Brussels to its network. However, the carrier is switching its UK operations from London Gatwick (LGW) to London Heathrow (LHR) for the first time. From Oct. 3, the airline will operate flights from Kigali (KGL) to Brussels (BRU) and on to LHR. Service will initially be 2X-weekly on board Airbus A330 aircraft, before rising to 3X-weekly from Oct. 26.

“We have been operating cargo and repatriation flights from London Heathrow during the pandemic and we are now delighted to operate scheduled passenger flights for the first time into and out of one of Europe’s premier airports,” RwandAir CEO Yvonne Manzi Makolo said.

“The move will significantly benefit customers flying into Heathrow from other UK cities who then wish to fly on seamlessly to Rwanda and other parts of Africa. It has never been easier to reach Kigali or cities such as Nairobi, Entebbe, Lusaka and Harare for passengers traveling from London.”

From Mar. 30 through July 31, RwandAir suspended all flights from Rwanda, with the exception of freight-only flights to China, to carry critical medical supplies to fight the COVID-19 pandemic as well as other essential cargo. Since Aug. 1, the airline has gradually resumed commercial flights across its network, including select African routes, as well as some long-haul destinations such as Dubai.

Ukraine International Airlines (UIA) plans to resume regular scheduled service to New York during the upcoming winter season. Prior to the COVID-19 pandemic, the carrier operated nonstop between Kyiv Borispil (KBP) and New York John F Kennedy (JFK) five times per week using Boeing 767-300ER and 777-200ER equipment. However, the route was suspended in March as the coronavirus crisis deepened.

JFK will rejoin the airline’s network before the end of the year although service won’t be direct. Instead, the airline plans operate the route on board 737-900ER aircraft with a technical stop at Reykjavik Keflavik (KEF). This means the block time of the outbound leg will be about 12 hrs. 35 mins and 11 hrs. 20 mins on the return eastbound leg. The 2X-weekly flights are earmarked to begin on Dec. 9 but, as reported by Airlineroute, UIA does not yet have traffic rights for KEF.

Sabre figures shows that O&D traffic between Ukraine and New York totaled 167,334 two-way passengers in 2019, down marginally on the year before.

Alaska Airlines has this week announced five new routes as part of its "sun and snow" strategy designed to spur leisure demand during the upcoming winter season. Two of the routes are from Los Angeles (LAX)—to Cancun (CUN) in Mexico and Reno (RNO), Nevada—while three are from Palm Springs (PSP).

LAX-CUN will be served daily from Dec. 17 until April 12, 2021 using Boeing 737 equipment. The planned launch of the route comes more than a decade after Alaska last served the two destinations nonstop, having ended flights in September 2010.

According to data provided by OAG Schedules Analyser, during the winter 2019/20 season LAX-CUN was served by United Airlines, Delta Air Lines, Southwest Airlines and Interjet. The latest schedules data shows United is this week (w/c Sept. 21) providing a 5X-weekly service and Delta is offering 2X-weekly flights.

The newly added service at LAX builds on recent additional routes to cites across the west for a total of 14 new routes this year alone. In July, Alaska announced seven new routes from LAX to further connect passengers between Southern California and key markets around the country, including the first nonstop service from the West Coast to Fort Myers/Naples (RSW), Florida, which begins Nov. 20.