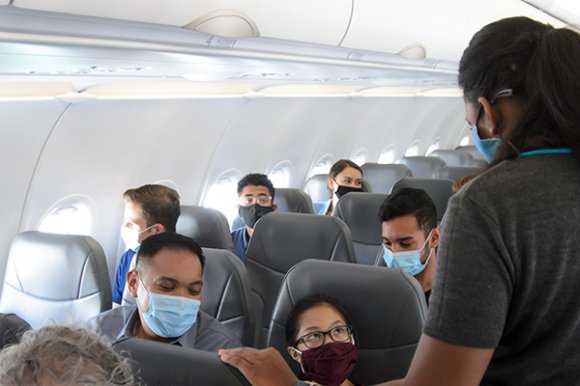 Daily passenger throughput at US airports topped 1 million people on Oct. 18 for the first time since mid-March, marking a symbolic turning point in the airline industry’s recovery from the COVID-19 pandemic.

The 1,031,505 people who passed through US airport security lanes on Oct. 18 was the highest number since March 16, although still down over 60% from the more than 2.6 million people who flew commercially on the same day last year.

The milestone comes as US carriers have reported steady progression in leisure travel demand, although most business and international travel remains grounded. The distribution of domestic leisure demand has been uneven, however, with carriers seeing strength in markets like Florida and the western US mountain states, while regions with strict quarantines—notably the New York area—remain depressed.

Cowen & Co. analyst Helane Becker estimated in a recent report that US leisure demand has recovered to around 85-90% of 2019 levels, while corporate travel is down 90% and international “is nearly non-existent.” Prior to the pandemic, leisure travel comprised around 40% of all passenger traffic, with the remainder split evenly between the corporate and international segments, according to Becker.

“There is pent-up demand for air travel. People are getting cabin fever and want to travel again,” Becker wrote Oct. 19.

Industry trade group Airlines for America (A4A) estimates passenger volumes were down approximately 64% year-over-year as of Oct. 15, with domestic traffic down 62% and international, down 79%. Airlines are operating around 48% fewer flights than a year ago, while nearly a third of the country’s combined commercial fleet remains idled, data from the group shows.

Industry-watchers are hopeful that demand will be boosted by the growing adoption of pre-flight COVID testing, which they view as a potential avenue for an initial recovery of long-haul transit. While the high price tag of such tests—typically between $150 and $200—may put off some potential travelers, Deutsche Bank analyst Mike Linenberg predicts those who fly business and first-class will be able to absorb the hikes.

“Furthermore, we expect the price of COVID-19 test costs to see a dramatic drop as they are rolled-out at more airports later this year,” Linenberg wrote Oct. 16, adding that introduction of rapid test options could potentially lower the cost to as little as $10 per test.

Carriers are also optimistic about a recent study by the US Transportation Command that concluded the risk of contracting COVID-19 in a commercial aircraft cabin, with masks in use, is practically nil.

“The results show when a passenger is seated and wearing a mask, only 0.003% of infected air particles could enter their breathing zone, even when every seat on the plane is occupied,” United CEO Scott Kirby wrote in an Oct. 16 staff memo, adding that aircraft cabins are “among the safest public, indoor environments in the world.”