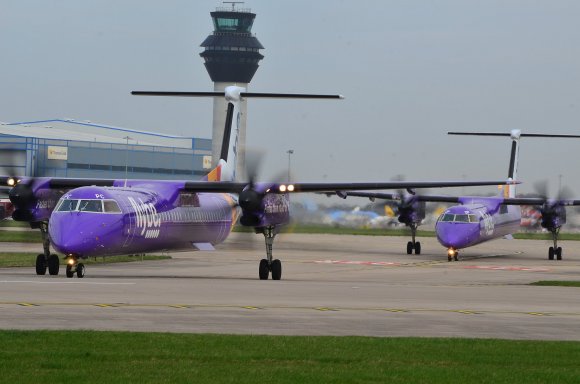 Administrators of Flybe this week announced that a deal has been struck with investors to restart the British regional airline.

The Exeter-based carrier ceased flying in March, less than two months after the UK government announced a rescue package.

At the time, the company blamed its demise on rising fuel costs, currency volatility, and market uncertainty, alongside “added pressures on the travel industry” following the COVID-19 outbreak.

However, it has now emerged that Flybe’s brand and remaining assets have been sold by administrators at EY to Thyme Opco, a company linked to New York-based hedge fund Cyrus Capital. Flybe was previously owned by a consortium that included Cyrus Capital, Virgin Atlantic and Stobart Air.

Simon Edel, an administrator at EY, said the deal would provide “a potentially significant boost to aviation jobs, regional connectivity, and local economies.” It is hoped that a relaunched Flybe could take to the skies again in 2021.

“While we plan to start off smaller than before, we expect to create valuable airline industry jobs, restore essential regional connectivity in the UK and contribute to the recovery of a vital part of the country’s economy,” a spokesperson for Thyme Opco said.

Prior to the coronavirus pandemic and the carrier’s failure, Flybe intended to fly from 27 airports in the UK during the summer 2020 season, as well as 28 internationally. In total, the carrier planned to offer 6.9 million available departure seats across 139 routes.

Manchester Airport (MAN) would have been the regional carrier’s largest airport by frequency and capacity, with 9,399 departures and 749,196 available seats.

Southampton (SOU) would have been the second largest by number of departures this summer—and was among the airports hardest hit by the airline’s failure. The airline accounted for 94.3% of capacity from the airport and 91.2% of flights.

Looking at Flybe’s network a year ago, it operated 71 UK domestic routes during October 2019, providing about 161,000 weekly seats across 2,200 flights. Belfast City (BHD)-MAN was the airline’s largest domestic route by capacity with more than 6,800 two-way weekly seats.

Of the 70 domestic routes, 59 of them were exclusive to Flybe. Loganair provided competition on four routes, British Airways on three, and Aurigny Air Services and easyJet on two apiece.

Eastern Airways, a former franchise partner of Flybe, has been one of the main movers, forming a codeshare with Aurigny and launching new routes between BHD and SOU, and Manchester-Newquay Cornwall (NQY) among others.

Blue Islands has also taken over several routes from Jersey (JER), including to BHX and SOU, while Loganair’s new services include flights between Aberdeen (ABZ) and BHD and BHX-Inverness (INV).

According to analysis of OAG schedules data, 44 of the 70 UK domestic routes operated by Flybe during October 2019 are now served by other airlines—or will be served over the coming weeks.

Only 11 of those 70 routes had competition a year ago and two of them, EDI-EMA and GLA-EMA, have been suspended since April. That means 35 former Flybe routes have been picked up by carriers, either shortly before or since its failure.