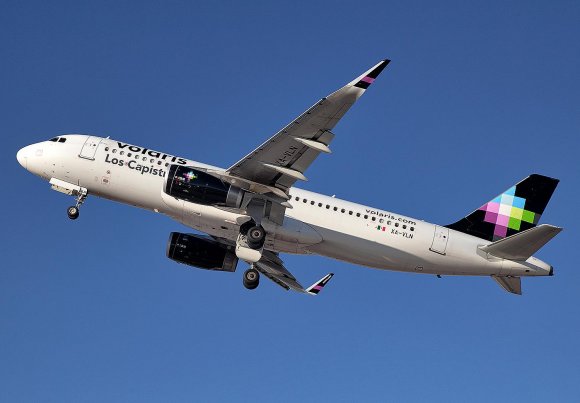 Mexican ultra-LCC Volaris has added back flights at a faster pace than its competitors during the pandemic recovery, as it capitalizes on a Mexican airline industry that is currently in a state of flux.
The carrier’s capacity averaged 75% of 2019 levels during the third quarter (Q3)—compared to less than 25% in Q2—and management expects capacity to average 90% during the 2020 fourth-quarter.

“Volaris is regaining capacity much faster than its competitors because over 70% of our point-to-point network is deployed on [visiting friends and relatives] and leisure routes, which are the fastest recovering segments in our markets,” Volaris CEO Enrique Beltranena said on an earnings call Oct. 23.

The company’s fortunes have been boosted by hardships at its two main competitors, AeroMexico and InterJet. The former is currently undergoing Chapter 11 bankruptcy restructuring in the U.S., while the latter is viewed by analysts as near-bankrupt. Unlike the generous levels of support showered on carriers in the U.S., the Mexican government has not issued any sector-specific relief to struggling airlines during the novel coronavirus crisis.

Beltranena said the pandemic and related financial struggles have caused its two main competitors to shed a combined 107 aircraft, which he estimated amounts to roughly a third of the country’s commercial narrowbody fleet. The downsizing has helped Volaris increase its share of the domestic market to 45% in September from 30% before the pandemic, while its international share grew  to 19% from just 4%.

“While Volaris does not consider market share to be a driver for our business, it is still a validation of the strength of our ultra low-cost business model penetration in the middle of the crisis,” Beltranena said.

The $3.1 billion Mexican bus market remains a key long-term growth driver for Volaris, as the country’s growing middle class is expected to increasingly switch from bus to air over the next decade. Beltranena noted that 41% of the company’s network overlaps with bus routes and currently lacks air competition, presenting a unique opportunity to grow market share while winning over large numbers of new flyers in coming years.

Volaris returned one leased A320ceo and received three new A320neos during the September quarter, ending the period with 84 jets in its all-Airbus fleet, including 7 A319s, 61 A320s and 16 A321s, of which roughly a third are neos.