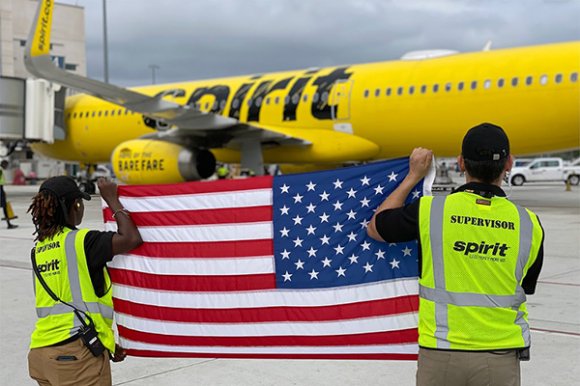 Spirit Airlines is expanding its network from John Wayne Airport (SNA) before its service even begins at the Orange County, California, airport.

The ULCC announced in September plans to launch two nonstop routes from Nov. 17, connecting SNA with Las Vegas (LAS) and Oakland (OAK). Flights were scheduled to operate 1X-daily to LAS and 2X-daily to OAK.

Now, the airline has confirmed it intends to add a second daily flight to LAS and new nonstop service to Phoenix Sky Harbor (PHX). The 2X-daily LAS service begins on Nov. 18 while the 1X-daily route to PHX starts on Jan. 6.

Orange County recently awarded Spirit additional takeoff and landing rights for 2021, which allowed for the expansion to PHX and additional flying to LAS.

“People are ready to travel again, and we are excited to expand our service portfolio from John Wayne with new nonstops to Phoenix and expanded service to Las Vegas, giving our guests more access to low fares on the West Coast,” Spirit VP of network planning John Kirby said.

Spirit’s decision to serve SNA is part of the Florida-based airline’s ongoing expansion across California. In 2019, service began to Burbank (BUR) and Sacramento (SMF), in addition to Los Angeles (LAX), San Diego (SAN) and OAK.

On the new SNA-PHX route, Spirit will face strong competition from American Airlines and Southwest Airlines. According to OAG Schedules Analyser, American is this week (w/c Nov. 9) offering a 2X-daily service while Southwest is flying 3X-daily.

“We have looked around throughout the country and in Latin America and attempted to determine are there areas where we would like to be that we have opportunity perhaps to get into. Obviously, Orange County is an example of that,” he said.