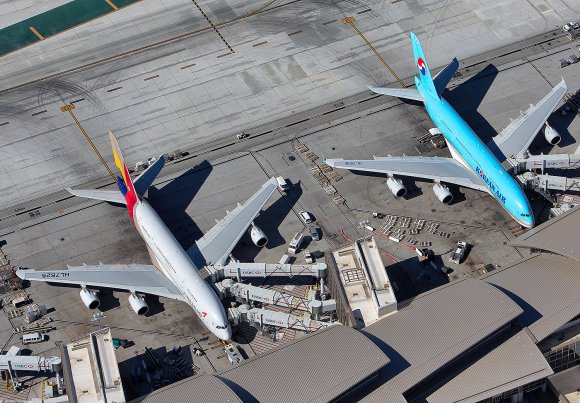 The board of Korean Air said the acquisition would help to stabilize and restructure the country’s aviation industry in the wake of the COVID-19 pandemic, streamlining route operations and lowering costs.

“More slots secured at Incheon International Airport, a transport hub in Asia, through the consolidation of the airlines, may lead to an increase in joint ventures with global airlines and greater transfer demand, which will also spur the growth of the domestic aviation industry,” Korean Air said in a statement.

“Customers will be able to enjoy a wider range of choices in routes and schedules. They will also be able to benefit from more convenient transfer options, integrated mileage and enhanced safety in all areas.”

Once the deal completes in 2021, Korean Air expects to become one of the top 10 largest carriers in the world, adding the expansion of its routes, fleet and capacity would give it “the competitiveness to compete with global mega airlines.”

SkyTeam alliance member Korean Air is the largest carrier in South Korea by capacity, OAG Schedules Analyser data shows, accounting for 23.4% of all departure seats in the country during 2019. LCC subsidiary Jin Air had a 7.6% share, making it the fifth largest.

Based on the 2019 figures, the merger of Korean Air and Asiana would create a business that commands a 57.5% share of all departure seats in South Korea. The domestic market the share would be 69.5%, while internationally it would be about 49.5%.

The main base of both Korean Air and Asiana is Seoul Incheon (ICN). The airport was the world’s 14th busiest in 2019, according to figures provided by Sabre Market Intelligence, handling more than 70 million passengers. Korean Air has blamed slot shortages in recent years for limiting its growth potential.

Looking at the potential impact of the merger at ICN, all five airlines provided service from the airport in 2019, led by Korean Air which offered more than 11 million departure seats. Asiana offered 7.5 million, Jin Air 2.4 million and Air Seoul 1.1 million.

Air Busan’s presence at ICN is much smaller, with the carrier providing just 27,690 departure seats in 2019. The airline’s main Seoul operation is at Gimpo International (GMP) where the LCC last year made 1.4 million departure seats available.

The airlines compete on a range of services but there is only one route all five fly: on the world’s busiest route between GMP and Jeju (CJU). Across the two groups’ respective route networks, there was no crossover on 147 of the 350 combined services offered.