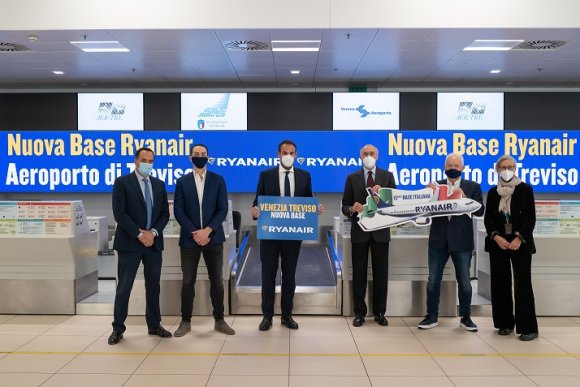 Ryanair is to open a base at Venice Treviso (TSF) ahead of the northern summer season as part of the airline’s ongoing expansion in Italy.

Two aircraft will be stationed at the airport from March 30, enabling the launch of 18 new routes. Three services will be domestic and 15 international.

The base will become the ULCC’s 15th in Italy, one of its biggest markets, and takes the number of routes it will operate from TSF next summer to 45.

“Italy is one of Ryanair’s biggest markets and we want to continue to support the economic recovery as well as regional & international connectivity across the country.”

Wilson said: “With the recent encouraging news that vaccines will soon be available, we are pleased to continue delivering growth to the region despite the current challenges of the COVID-19 pandemic, but we need to start now on the road to recovery.”

According to data provided by OAG Schedules Analyser, Ryanair was the largest operator at TSF prior to the coronavirus outbreak. The airline offered more than 1.5 million departure seats from the airport in 2019, giving it an 85% share of all available seats during the year.

In summer 2021, the Irish carrier also plans to offer six routes from Venice’s primary airport Venice Marco Polo (VCE), with increased frequencies on three of them. Barcelona (BCN) will be served up to 10X-weekly and London Stansted (STN) up to 19X-weeky.

In addition, Ryanair will fly to nine destinations from nearby Verona (VRN) and add frequencies on routes to Birmingham (BHX) and Cagliari (CAG).