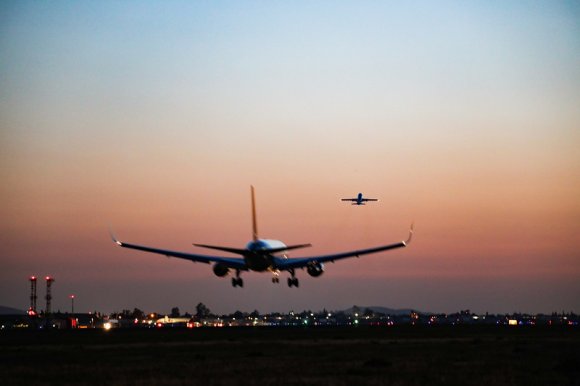 What’s the current situation at the airport?

They're actually going pretty well! Being down 55% down on traffic is never a great year but we've actually had a stronger recovery than the rest of Southern California. More than the rest of the state, other than maybe Fresno and a couple of smaller airports.

Among the top 50 US airports I think we're in the top three to five, so we've been pretty fortunate to have a relatively strong rebound of our passenger traffic.

The other thing is the cargo growth, that’s been unprecedented for us; 20% to 30% every month since the onset of the pandemic.

It's the fastest growth in North America; Anchorage is close but that’s cargo passing through to clear customs and for airplanes to refuel. So in terms of an actual market we're growing faster than anyone else.

What’s behind this relative success?

The cargo has been driven by e-commerce; we have UPS and Amazon hubs. And then in November FedEx just opened a new regional hub as well. So I expect that growth to continue into 2021.

We’ve also found a lot of new non-airline revenue streams and done a number of different things creatively to try to maximize revenue on our real estate.

There’s lease revenue from the big FedEx hub, peak period truck parking, car dealerships and rental car company cars. And we’ve brought in online prepaid parking; that’s not new in in Europe but it is in the United States.

I'm excited about 2021 because we more than 300 acres of surplus real estate that we're going to take to the market in January or February, so we're going to be able to create some more revenue streams, independent from airlines, to try and offset some of the operating expenses.

In the longer term we can then borrow against those revenue streams, so that we don't need the traditional US approach of taking on debt and then having the airlines pay off the debt.

Where does all of this leave the airport, financially and in terms of operations?

We were really careful in our budget processes last year. Since the transfer the airport from Los Angeles World Airports four years ago we had about 450 employees and that got cut down to about 50; today I think we're up to 64 employees.

So that led us to cutting back a lot of the spending on some of the contracts and we cut about 40% of our spent expenses. And so far this year our revenues have exceed our expenses, so we're performing better than budget with passenger traffic and certainly with cargo.

I think as a result we're going be able to keep our rates flat. That hasn’t necessarily been a huge factor up to this point, but I do think that we're in a different era now with COVID and airports will have higher debt loads.

Servicing that debt will create a cost burden and they will need really elevated traffic levels to be able to pay for that.

That will help you compete against other airports when traffic comes back, I assume?

We’ve had the first indications of something being a bigger problem than it's ever been before with the announcement recently by the Port Authority they're putting off about $1.6 billion worth of projects.

So here in Southern California we see it as an advantage. We're not looking to be LAX, but we’re the only other truly international airport in the region and the only airport that has capacity to grow.

We think we can grow to 35 or 40 million passengers. We don't want to grow beyond that, so we would still be smaller than LAX, but we think there's a lot of growth opportunity. And if we compare our cost situation to theirs, we're about 10% of the cost right now.

Clearly airlines aren’t going to leave LAX, but I think you're going to have airlines being much more rational in terms of financial decision making that they that they do when they look at these airports.

What else about your market will attract growth in airlines?

Driven by the pandemic, a lot of airlines have made bets on some leisure markets, and from what I understand the returns on some of them have not been what they thought.

So I think one of the opportunities is that airlines are reacting faster and pursuing different opportunities, and that's good for us.

We're a gateway to all of Los Angeles, just like LAX or any other airport can be, but our primary region of serves the two inland counties—Riverside and San Bernardino—of the five counties that make up the Greater Los Angeles region.

A lot of airlines are thinking back to the last global financial crisis when the housing sector was the real driver of the downturn, and it really affected this area because this is where the new homes were.

I'm simplifying a little bit but I think airlines are starting to see that there's something different in this region and it's borne out by the recovery of passenger traffic and definitely the cargo.

Can you explain how cargo directly influence an airline’s decision to fly to you?

I think one of the things that's resonated with airlines, and we saw this a lot at Routes Reconnected 2020, is that cargo is this great insurance policy for them in terms of costs.

For international widebody flights there's a huge cargo opportunity for them revenue wise, but also there's less of a cost issue because the landing fees are going to be kept pretty low; they’re a fraction of all the other airports in Southern California because even through the downturn, UPS, FedEx, and Amazon had banner years.

That whole airfield, the public utility part of an airport, is usually just zeroed out at every airport. Well, when you have big cargo airlines like FedEx and UPS and Amazon, they're covering most of those costs.

These other users of the airport have invested hundreds of millions of dollars in facilities are not going to go away or retrench if their business goes into slowdown.

That's a huge opportunity for airlines, and we think there's more of an openness to consider these kinds of opportunities because the old playbook has been scrapped.

In terms of passenger traffic, are you seeing inbound leisure over winter, with the good weather?

Oddly enough our rebound has not been driven by inbound leisure travel. I think inbound leisure is still going to LAX; it's fair-sensitive and they have more competition.

There's maybe a little bit of that, but we perform differently that other parts of Southern California in that we get more business travel. On the outbound side our business travel is SMEs. Big corporates have all cut back but SMEs have to get out on the road to survive. Plus those logistics companies that have never been busier.

I call ourselves kind of a boutique airport; business travelers will pay a premium to not have to get on the roads and dedicate two to three hours of their time driving to an airport to save $200.

But I do think with the Frontier growth next year, and some other airlines that are coming in pretty soon, you'll start to see more of that leisure traffic coming into this airport and more competition which will bring down fares.

We’ve started to get some airlines to really see that we market ourselves, particularly on the international side, as a great gateway to get to all of the LA basin and also to Death Valley, Las Vegas, and Palm Springs is right down the road. San Diego is 90 minutes away and we’re probably closer to Disneyland than any airport besides John Wayne.

Internationally our message is this is not where people are not necessarily coming to Ontario, but it's a great gateway to go in all the places they want to go.

Which geographies do you see this international growth coming from?

I think we'll first work with China Airlines when their service resumes; they've been in the market for years and come back in the spring.

I think what we'll see is viability to go to more destinations in Asia. 57% of the demand to Asia that originates in Southern California comes from postal codes closer to ONT than LAX, and if you look at ticket booking purchases for China at 60/65% of that market is closer to ONT.

For Vietnam its 70%, Taiwan 70%, Philippines 50%, so I think there's four or five more cities in Asia, we could logically get service to and support it very effectively.

I also think London, Frankfurt and a couple of markets in Europe. South America is tough. Even at LAX it's tough to make those markets work because the South American populations tend to be more Miami and Florida.

There's good opportunities there, and even Canada eventually when things resolve there with the quarantine.

I think it’s just a logical time for this this region to start to have international service at two airports, we’re one of those markets that's the size where it doesn't make sense to have 90% plus of your international traffic going out of an airport that sits on the far west, on the ocean basically in a huge metropolitan area.