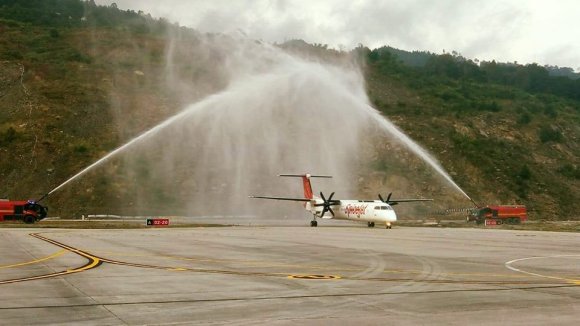 Commercial flights are set to return to Pakyong Airport (PYG), a greenfield airport near the eastern Himalayan city of Gangtok in India, after an absence of 18 months. SpiceJet plans to connect the airport with Delhi (DEL) from Jan. 23, with a nonstop service operating daily using De Havilland Canada Dash 8 aircraft. The route will be operated as part of the second phase of the Indian government’s UDAN scheme, designed to boost connectivity to smaller regional airports.

At 4,646 ft, PYG is one of the five highest airports in India and has been described as one of the most scenic in the world. After its inauguration in October 2018, SpiceJet served the airport daily with flights from Kolkata (CCU) and Guwahati (GAU).

However, the GAU-PYG route ended in March 2019 and CCU-PYG ceased three months later. At the time, SpiceJet blamed the “unpredictable weather” in Pakyong which results in “very low visibility, hampering flight operations.” PYG has been without any commercial services ever since.

SpiceJet chairman and MD Ajay Singh said the return of flights would cater for “the growing demand for leisure travellers and backpackers who wanted to visit this beautiful city in the foothills of the Himalayas.” Gangtok is a popular Buddhist pilgrimage site and has emerged as tourist destination for trekking, mountaineering, river rafting and other nature-oriented activities.

As well as launching DEL-PYG flights, SpiceJet has announced plans to add a second daily frequency on the DEL-Leh (IXL) sector from Jan. 27. Leh is the largest town of India’s Ladakh region, located at an altitude of about 11,562 ft. SpiceJet operates the route using Boeing 737 aircraft.