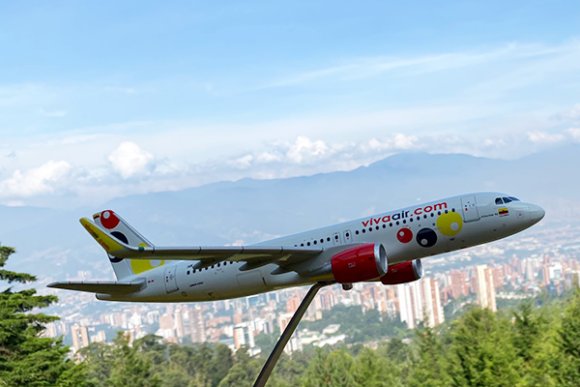 Viva Air Colombia is adding three new international routes from Medellin, the second-largest city in Colombia, as part of efforts to “decentralize” flights in the country.

Viva Air president and CEO Felix Antelo said the "Hub Medellin" project would seek to make air connections from the city “just as important” as ones from capital Bogota's El Dorado International (BOG). The company’s strategy would promote tourism and contribute to the economic recovery of the region, he added.

The expansion from Medellin’s José María Córdova International (MDE) will see the ULCC launch two routes to Mexico and one to the US, increasing the number of international services from the base to five. The carrier currently only flies to Lima (LIM) and Miami (MIA) from the airport.

“We have a clear conviction: it is time to decentralize flights in Colombia, to make Medellin our strategic hub for the region,” Antelo said. “Nine years ago, our story began among the mountains of the capital of Antioquia. Medellin is our home, here we were born and here we operate.

“As an airline we understand that aviation in Colombia cannot depend solely on Bogota and a single airport. Therefore, we seek to make air connections from Medellin just as important as those from El Dorado.”

Details of the three routes come a week after Viva Air announced plans to add two new domestic services from MDE. Connections to the eastern cities of Cúcuta (CUC) and Bucaramanga (BGA) start in early April, with each route set to operate daily.

Viva Air has almost 22,000 departure seats on offer this week (w/c Feb. 15, 2021) from MDE, according to analysis of data provided by OAG Schedules Analyser, giving the carrier a 32.7% capacity share. This puts the airline ahead of Avianca on 28.9% and LATAM Airlines Group on 26.1%.

During the same week a year ago, Star Alliance member Avianca was the airport’s largest airline with more than 46,000 available weekly departure seats and a 41.7% share of all capacity on offer. Viva Air was second with 25.2% and LATAM third with 18.5%.

Although Viva Air intends to focus on the continued growth of its MDE hub this year, new routes are also scheduled from BOG. The ULCC has recently confirmed the launch of a BOG-BGA service alongside a 4X-weekly route to MEX, which starts on June 2.

Viva Air’s planned new routes to MEX and CUN come at an interesting time for the Colombia-Mexico market, with competition set to intensify over the coming months.

Before the COVID-19 pandemic, Avianca, Interjet and Aeromexico were the market leaders, collectively controlling 96% of the 1.7 million scheduled seats between the countries during 2019. However, with Avianca and Aeromexico undergoing restructuring programs and the ongoing suspension of Interjet’s operations, LCCs are sensing an opportunity to capture market share.

Earlier this week it was reported that Mexican airlines Volaris and Viva Aerobus had both applied to Colombia’s civil aviation authority to begin flying to the country. Volaris wants to open four routes—from MEX and CUN to both BOG and MDE—while Viva Aerobus hopes to launch MEX-BOG flights.

It is understood that the government organization will decide later this month whether to grant the two ULCCs the rights to launch the services.

Since the reactivation of air transport in Colombia following its shutdown last March, the number of passengers carried in the country totaled 6.06 million between Sept. 1 and Jan. 31, 2021. This comprises around 4.7 million domestic and 1.3 million international travelers.

Speaking in early February, transport minister Angela María Orozco praised the positive way in which local authorities, airports and airlines have worked to restore air services. “We will continue to advance in this process with care and determination, since we understand that by air, we help to reactivate other sectors, such as tourism and commerce,” she said.