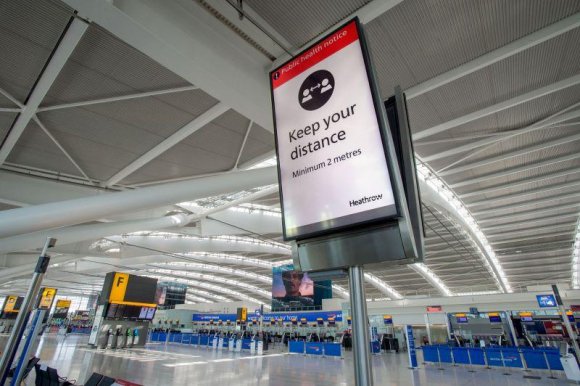 A coalition of airline CEOs and other executives from across the travel and tourism industry called on US President Joe Biden to take steps to restart air travel between the US and the UK.

The group—which includes Delta Air Lines CEO Ed Bastian, Hawaiian Airlines CEO Peter Ingram, JetBlue Airways CEO Robin Hayes and United Airlines CEO Scott Kirby—said in a letter to the White House that “resumption of travel between low-risk countries, and in particular among vaccinated individuals, should be allowed to resume.”

They urged Biden to commence talks with UK Prime Minister Boris Johnson on the formation of a travel corridor between the two countries, both of which have made substantial progress vaccinating their populations.

In the US, approximately 58.5% of adults have received at least one dose of COVID-19 vaccine, according to the Center for Disease Control and Prevention’s COVID Data Tracker. Vaccine doses have been administered to more than 38 million people in the UK, representing more than half of that country’s population, according to UK government data.

In addition to establishing a travel corridor between the US and UK, the CEOs urged Biden to form a public-private taskforce, beginning this May. The taskforce would guide the administration to develop a risk-based, data-driven roadmap outlining steps to lift travel restrictions between the US and other low-risk countries by July 1.

They also called on Biden to use the upcoming G-7 summit, scheduled for August 24-26 in Biarritz, France, to seek commitments from the leaders of other rich nations to develop a global framework for the safe reopening of international travel, encompassing COVID-19 testing, vaccinations, recovery status and digital health passports.

“A clear path forward, relying on current data and science, is needed to ease entry restrictions and quickly and safely reopen this critical segment of America’s economy,” the executives said in their letter.

The lobbying effort comes as US domestic travel continues to rebound off the lows seen last year, with daily travel numbers tracked by the Transportation Security Administration (TSA) now topping 1.6 million on peak days, compared to around 2.5 million during pre-COVID times, with much of the lost traffic stemming from corporate and long-haul international flows.

In a recent Moody’s report, a group of credit analysts said they expect the international operations of US airlines to remain “significantly curtailed” through the summer season, with “green shoots” starting in the fall after European borders reopen and infection rates decline in Latin America.

Travel between the US and Asia will take longer, and require the end of lockdowns in Japan and removal of border restrictions across the region, they said.