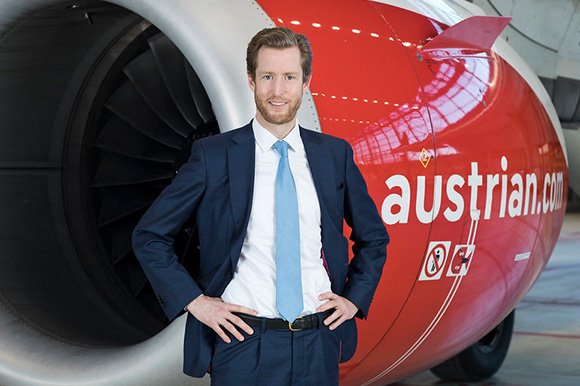 Before the pandemic occurred, what was the strategy with Austrian Airlines?

Before COVID-19 Austrian was a midsize European airline. We were carrying about 15 million passengers and had roughly 80 aircraft, most of them stationed in Vienna, but also some in smaller cities around the country.

We had a quite diverse fleet from turboprop aircraft, Embraer, Airbus, Boeing 777s and 767s, but the company had been profitable over the last seven years and had been growing.

But then there was Air Berlin, which went bankrupt along with its subsidiary flyNiki. So just after I started there was a massive run of different low-cost carriers that thought, ‘Now it's time to enter Vienna as a nice battleground to capture the former market share of Air Berlin.’”

So, within a couple of weeks four low-costs announced that they were setting up bases in Vienna and we became probably the biggest battlefield in Europe.

Vienna Airport (VIE) actually grew by 20% in 2019; they’d been growing by 2% over the last 10 years annually before that. This shows what kind of price battle was happening.

So that was the background, and in response we kicked off a restructuring program to take out a lot of complexity to try to lower unit costs. We were pretty progressed on that and although not yet implemented already we had already decided a lot.

And in a way that was quite helpful because when COVID hit us we already had a large chunk of our restructuring program developed.

Of course, then last year in April when COVID hit us we actually grounded our entire fleet. We were on the ground for three months and during this time we finalized our recovery plan.

So how will Austrian be different following the restructure?

The starting point was, ‘What will the market look like after COVID compared to before,’ and our assumption was that the market size will be smaller, partly because business travelers were not returning, and it will take a long time until we are back at pre-COVID levels.

Therefore, we said we need to shrink the company by a certain amount. Of course, we don't know how much smaller the market will be in the future, but it's worse to be too big than too small.

Overcapacity is always far more expensive, and if you're too small then you can still attempt to turn up the yields, which will of course be positive on the profitability.

We said we wanted to shrink by 20% in terms of capacity, that was the figure that we had arbitrarily set.

Shrinking is always bad, but there's one big opportunity that comes from it, which is to accelerate fleet cleanup. When you shrink then you shouldn't take out three aircraft here and two aircraft there, you should get rid of entire fleets.

So, we decided that we will get rid of our entire turboprop fleet and entire Airbus A319 fleet. We also got rid of our oldest long-haul aircraft, three of which were close to 30 years old, so we thought that by the time COVID is over they will be too old to fly.

This means we reduced our fleet from 80 to 60 aircraft, taking out one-quarter of the fleet or a little under 20% of the capacity because we're removing smaller aircraft. Our fleet will look much less complex and have much better unit cost on average than it had before.

We also decided to close down all the activities of the company outside of Vienna. So all flying that we were doing from Graz to Dusseldorf, Linz to Stuttgart or Innsbruck to Frankfurt.

We also closed all maintenance bases because anything outside Vienna is not part of our future.

Is that change permanent or temporary?

That’s permanent. We're only focusing on the Vienna hub. That's our core business and what we need to defend.

In Vienna we are running a quite traditional hub-and-spoke system with a focus on long-haul and services to Eastern Europe.

We are convinced that we can run that in a profitable way, but we need to take out more complexity, so we were running a massive overhead reduction program and removing as much infrastructure as possible.

The most prominent is we have a big head office with eight floors, and we closed half of that. That's actually quite a bold move because it was full before COVID.

Our team are now working from home, and I have the strong belief that if you want people to not return to their old habits, then you need to change the environment.

So, therefore, the remaining part of our head office we will set up a kind of coworking space with no fixed desks and virtual offices, and motivate people to be at home as much as they can.

Other than the reduction in hubs, how will Austrian’s network look different?

We all expected that leisure travel will recover faster than business travel. Fortunately, we always had a certain focus on leisure travel, and we are expanding that focus.

We will also continue to invest into this because we want to capture a larger share of leisure trade.

How are you reorienting your products to cater more to leisure?

We already have a strong footprint and we want to increase that by changing our sales approach and how we work with tour operators.

In the past we have supplied manual processes and we're changing to digital processes that will allow us to sell in a much easier way. We know that ease of sales is one of the strong drivers.

We will add some long-haul capacity for to leisure destinations. We are opening Cancun in November; we have flown to Mexico for a long time. We are adding frequencies to Mauritius, the Maldives and South Africa, and these will play a larger role in the future than in the past.

After removing the smaller aircraft from your fleet, how do you then rightsize for these newer markets?

Over the last few decades, we have seen that regional aircraft flying is basically dying out, at least within Europe, and most successful network carriers got rid of most of their small regional aircraft.

This is a trend that you can't work against because the ticket prices came down so much that the unit costs of the small aircraft are just too big.

That’s a big jump from 74 to 120 seats, and then the next aircraft is the Airbus 320. It's a big step, but I think given how markets have developed over the last years and decades this is the right composition.

It's so much easier nowadays to simulate traffic than it was maybe 20 or 30 years ago.

What has been the reaction in Austria to these bold changes?

There are mixed feelings and when we received the state aid it was quite a big package and the public reactions were quite also mixed. But the Austrian government understood that it's very valuable to have a carrier hub-and-spoke network sitting in Vienna as it massively increased the connectivity of the city.

However, of course there is a constant debate. Just a few weeks ago we announced that we were increasing the number of staff that we needed to make redundant from 1,100 to 1,350. There was a public outcry in the media and some politicians were also asking how we can justify receiving state money and at the same time making people redundant.

My reply to that is usually that if you want a job guarantee, then you also need to have to have a guarantee that you keep on spending money for us as a government.

It’s in the best interests of the government and the taxpayer that our company is profitable and doesn't need additional money in the future from the government. Therefore, the company needs to be healthy, and it’s better to reduce the workforce by 1,350 than risk another 5,000-6,000 by running into bankruptcy.

It's not easy to get that across in public opinion, of course, but fortunately our relationship to the government is strong and they support us.

How have you handled the challenge of leading Austrian through the COVID crisis?

I think leadership becomes far more important in a crisis than in normal times. We know that when you're captain of a boat and it's all sunshine, it's easy to be a leader.

But once things really get tough, once the storm hits you, it becomes difficult to keep the ship on course, that’s when leadership becomes very important.

And this also works for the team. We all got very nervous when we were hit by the crisis because we didn't know what was happening. We were a stable business before and within a few weeks we moved to the brink of insolvency.

This is something I haven't experienced before, and it’s really tough because suddenly everyone is extremely nervous and very worried that they do not want to lose their job.

And at the same time, they're all suddenly stuck at home so you can't meet them, you're have to talk to them by a video. Fortunately, we have this technology, just imagine this happening 30 years ago.

Communication becomes the key thing to do; I genuinely think that communication is the most important skill as a leader, next to strategy. And it became far more important than it ever was in the past, but it’s not easy because people expect you to show them confidence that there is a way out of this crisis and the company has a future.

At the same time, as a leader, you don't necessarily know whether you can successfully achieve this.

What's been your biggest lesson learned from COVID-19?

There are so many lessons learned! I learned a lot about leadership, because I thought that I was crisis-proven before, but now after COVID I know that I'd never experienced a real crisis before.

It just shows me how important that is and how difficult it can be lead a company through such a situation, and how many things can go wrong and how many risks you sometimes need to take as a leader in order to achieve the right thing for the company.

That was for me the biggest personal learning that I had.

Apart from that, I think what we all learned that we must always be prepared that very unlikely things can happen.

None of us would have ever have thought that such a crisis could occur. We thought that 9/11, with four days of North Atlantic closure, was the worst thing that could happen to our industry, and now we are we are down for more than a year.