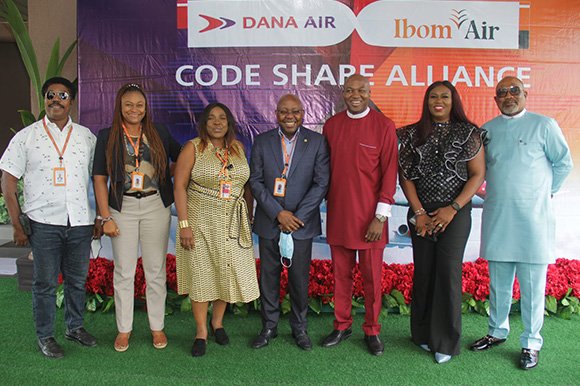 Nigerian carriers Dana Air and Ibom Air have signed an agreement to begin codesharing on domestic routes. The deal will start in June and comes a year after the two airlines began discussing ways to deepen ties.

“This is the first of its kind for domestic airlines in Nigeria and a huge step in the right direction for both Dana Air and Ibom Air,” Dana Air Chief Operating Officer (COO) Obi Mbanuzuo said.

Ibom Air COO George Uriesi added: “The alliance will offer increased frequencies into common destinations, as well as codeshare flights into destinations each airline does not operate into, providing more options for passengers and business retention for both airlines.”

The carrier has a fleet of five CRJ900 aircraft, with two Airbus A220s set to be delivered over the coming weeks.

Dana Air also operates predominantly from ABV and LOS, flying to ENU and PHC, as well as to Owerri (QOW). The airline has a fleet of two Boeing 737s and six MD-80s.

According to data provided by OAG Schedules Analyser, Dana Air has a 32.9% capacity share of domestic seats in Nigeria in May 2021, with Ibom Air commanding 14% of the market.

The codeshare agreement between the carriers comes as startup Green Africa prepares to begin flight operations on June 24. The Lagos-based LCC has so far taken delivery of two ATR 72-600 aircraft, with a third expected shortly.

The airline will fly from LOS to ABV, Akure (AKR), ENU, Ilorin (ILR), PHC and QOW. “This is a pivotal milestone on this journey, and we are delighted that the Green Africa vision is becoming a reality,” founder and CEO Babawande Afolabi said earlier this month.