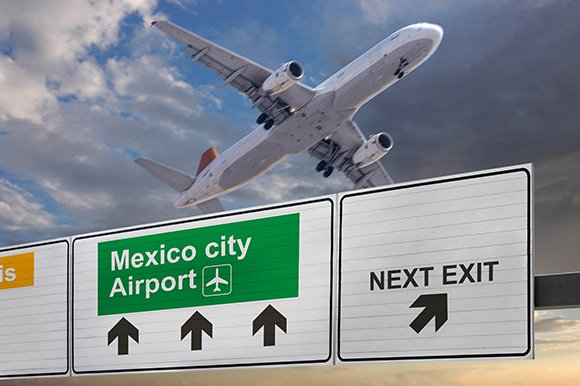 The FAA has confirmed that Mexico’s aviation safety rating has been downgraded—a move that prevents Mexican carriers from adding new US routes and blocks the ability of US airlines to market and sell tickets with their names and designator codes on Mexican-operated flights.

In a statement, the FAA said that during a reassessment of the Agencia Federal de Aviacion Civil (AFAC) from October 2020 to February 2021, it identified “several areas of non-compliance with minimum ICAO safety standards.” As such the country has been downgraded from Category 1 to Category 2 status.

The FAA did not provide details of its findings but said it would increase its surveillance of Mexican airlines and work with AFAC to help it regain Category 1 status. The US previously downgraded Mexico to Category 2 in 2010 for about four months.

Although international travel worldwide remains about 74% down on pre-pandemic levels, the transborder market between the US and Mexico has rebounded strongly in recent months, fuelled by growing leisure demand and VFR traffic.

While the US-Mexico land border continues to be closed to non-essential travel, Mexico’s decision to allow entry by air without the need for a PCR test or quarantining on arrival has also been a significant contributor to the capacity growth.

According to analysis of data provided by OAG Schedules Analyser, more than 3.3 million two-way seats are been offered by airlines on routes between the two countries during May 2021. This compares with 3.1 million during the same month two years ago, meaning the market now is 9% larger than it was in May 2019.

The latest schedules also indicate that capacity for June 2021 will rise to 3.6 million seats, while July’s figure will be almost 3.8 million—the highest monthly total since March 2018.

Mexican carriers currently account for about 30.7% of the weekly capacity available between the US and Mexico, led by ULCC Volaris which has a 14.2% share. Viva Aerobus accounts for about 8.4%, with Aeromexico on 7.6% and Transportes Aeromar on 0.5%.

Overall, American Airlines is the market leader with a 20% share, followed by United Airlines on 16.7%. Aeromexico’s joint venture partner Delta has 11.9%.

Although the overall share of seats operated by Mexican airlines on transborder routes has shrunk from about 34% two years ago, this is largely because of the grounding of Interjet, as well as Aeromexico scaling back its operations as part of its Chapter 11 restructuring process.

However, Mexican ULCCs Volaris and Viva Aerobus have made significant ground in recent years, with each carrier seizing opportunities to expand their US footprint.

The expansion of Mexico’s ULCCs

Volaris and Viva Aerobus have been two standout performers on US-Mexico routes in recent years. OAG data shows that Volaris is this month offering service to 21 destinations in the US—the same number as before the pandemic—while Viva Aerobus is flying to 10, two more than in May 2019.

In terms of routes, Volaris is this month offering 59 nonstop services, up from 54 two years ago, while Viva Aerobus is flying 20 routes, up from eight.

Adding flights from Mexico City (MEX) has been a particular focus for both ULCCs, with Volaris operating about 25,000 additional US departure seats from the airport in May 2021, compared with May 2019, and Viva Aerobus offering almost 39,000 extra seats.

Speaking at Routes Reconnected in December 2020, Volaris CEO Enrique Beltranena claimed the airline has a “once in a lifetime” chance to expand from Mexico’s main international gateway—an airport where securing slots was notoriously difficult before the coronavirus crisis.

“There was a de facto grandfather rights system over slots at Mexico City—but that only applies if the operators are current in their payments,” Beltranena said. “That means there is a big opportunity for Volaris to operate in Mexico City.”

OAG schedules show that the likes of American, Alaska Airlines, Frontier, JetBlue, Spirit and Southwest are among the carriers which have started new routes between the US and Mexico since the onset of the pandemic in March 2020.

As reported by Routes, Viva Aerobus has also expanded its network during 2021. New routes include flights from Bajío International (BJX), which serves the cities of León and Guanajuato, to Houston George Bush (IAH) and San Antonio (SAT), alongside a seasonal link between the leisure resort of Los Cabos (SJD) and Cincinnati Northern Kentucky (CVG).

In June, the airline also plans to begin flying to new destination Austin-Bergstrom International (AUS) from MEX and Monterrey (MTY). MEX-AUS will be seasonal from June 20 through Oct. 25, while MTY-AUS will operate year-round from June 19. Both routes will be served 2X-weekly using Airbus A320 aircraft.

On July 3, Viva Aerobus also plans to begin a 2X-weekly service between CUN and IAH, while a 1X-weekly route between CUN and Newark (EWR) starts on July 4. Flights will be operated using A320s.

What does the downgrade of Mexico mean for airlines?

The restrictions on codesharing with Aeromexico will be an inconvenience for Delta, but US carriers will otherwise be unaffected by the FAA’s decision. For Mexican airlines, the downgrade will have a bigger impact.

Although the new rating allows Mexico’s carrier to continue existing service to the US, it prohibits any new flights and routes that have not already been approved. The decision also stops equipment changes, such as using larger aircraft on routes.

Any further increase in Mexico-US service being planned by Volaris and Viva Aerobus will therefore have to remain on hold for now.

How has the Agencia Federal de Aviacion Civil reacted?

The AFAC said it was “fully committed to complying” with the surveillance system in terms of operational safety, in accordance with the norms and standards of the ICAO.

“The AFAC will take advantage of the total willingness expressed by the United States body to provide its experience and support, and to continue in the permanent efforts that Mexico is making to resolve the identified findings, in order to recover Category 1 as soon as possible,” the authority said.

“The national airlines currently operate with high levels of safety and quality of service, comparable to the international standards of any line that flies in the neighboring country to the north.”