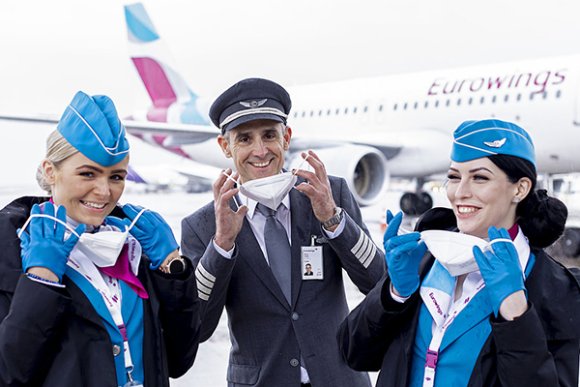 Eurowings is opening a new base in Prague (PRG), stationing two Airbus A320s in the Czech capital from Oct. 21. A third aircraft will be added in summer 2022. The base becomes the Lufthansa subsidiary’s 10th in Europe.

WestJet plans to grow its Hawaii network this winter, with new non-stop service from Calgary (YYC) to Kona (KOA) and Lihue (LIH) and more 787 flight options from Western Canada. The airline intends to offer 57 weekly roundtrip flights on 10 nonstop routes during the season. The new routes from YYC to KOA and LIH will each be served 1X-weekly from Dec. 19.

“We've increased our winter service to Hawaii by more than 25 per cent from 2019 to ensure our guests have increased flexibility and the most affordable, non-stop options from Western Canada,” WestJet CCO John Weatherill said.

Air New Zealand has extended its agreement with the Australian Government to operate flights between Norfolk Island (NLK) and Australia from Aug. 31 until the end of August 2023. Under the agreement, the carrier will use its Airbus A320 aircraft to operate up to three flights per week from Brisbane (BNE) and three flights from Sydney (SYD).

COO Carrie Hurihanganui said the airline would establish a temporary pilot and cabin crew base in Brisbane until Nov. 30 to ensure potential disruptions to the travel bubble will not affect continuity of services to Norfolk Island.

Aerolineas Argentinas is restoring flights to New York from July 19. The airline has scheduled three flights per week between Buenos Aires Ministro Pistarini (EZE) and New York John F Kennedy (JFK). Flights are scheduled to depart EZE at 8.30 a.m. on Mondays, Thursdays and Saturdays, returning from JFK at 2.45 p.m. on Tuesdays, Fridays and Sundays.

Air Serbia has launched nonstop flights between Belgrade (BEG) and Rostov-on-Don (ROV), operated by A319s. The Serbian national airline planned to establish an air connection between the destinations in June 2020, but the start of flights had been postponed due to the pandemic. As of July 4, the carrier will also resume service from BEG to Barcelona (BCN) after a year hiatus. Flights will be offered twice a week on Thursdays and Sundays.

Oman Air is resuming flights between Muscat (MCT) and Beirut (BEY) in Lebanon—a route the airline last served in 2017. Flights will begin on July 4 through Sept. 16, operating 2X-weekly using 737 aircraft. OAG data shows the airline will be the only carrier on the route.

Emirates will resume flights from Dubai (DXB) to Nice (NCE) from July 2 and Lyon (LYS) from July 9, initially offering four flights a week to each city. The move is in line with France easing its entry requirements for visitors, which started on June 9. The lifting of entry restrictions will enable travellers based in the UAE to visit France without the need for quarantine. Emirates is also restarting a 3X-weekly service to Malta (MLA) via Larnaca (LCA) in Cyprus from July 14 using Boeing 777-300ERs. The move expands the airline’s network to 34 European destinations.

Air Nostrum, an Iberia franchisee, is launching a new route between Barcelona (BCN) and Melilla (MLN) this summer. Flights will start on July 24 through Sept. 4, operating on Saturdays. With the launch of the route, the carrier will offer eight connections to Melilla, a Spanish autonomous city located on the northwest coast of Africa.

Lufthansa Cargo’s time:matters is adding dedicated freight services from Frankfurt (FRA) to Birmingham (BHX) and Dublin (DUB). Flights will be 5X-weekly, effective immediately. In addition, time:matters has expanded connections between Europe and the US. Customers now have access to more than 30 additional direct flights per week between Paris Charles de Gaulle (CDG) and 10 destinations in the US.