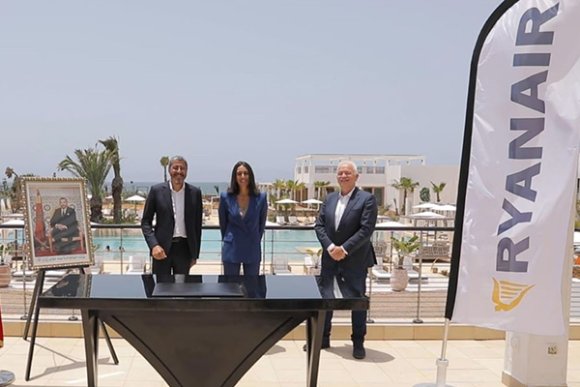 Ryanair is opening a new base in Agadir (AGA) in Morocco during the winter 2021/22 season. The ULCC will base two aircraft at the airport and launch 16 new routes to seven European countries. Destinations will include Bologna, Brussels, Dublin, Paris, Porto, Rome and Toulouse. The expansion will increase the number of points served from AGA to 25 and will see Ryanair offering 55 departing flights per week. “We have enjoyed an excellent partnership with this airport since our very first flight from Agadir in 2008 and we are very happy to continue to grow in the region after 13 years of success,” Ryanair DAC CEO Eddie Wilson said.

German leisure airline Condor has released its short- and medium-haul flight schedule summer 2022. The carrier will take off from Berlin (BER), Dusseldorf (DUS), Frankfurt (FRA), Hamburg (HAM), Leipzig (LEJ), Munich (MUC), Stuttgart (STR) as well as Zurich (ZRH) to 33 vacation destinations. Palma de Mallorca (PMI) will be served daily from seven of the departure airports. In addition to other destinations in Spain and Portugal, 16 destinations in Greece are served. Croatia, Italy, Egypt, Cyprus and Turkey are also on the schedule. In addition, the Lebanese capital Beirut and Sulaimaniyya in the autonomous region of Kurdistan in Iraq will be served.

Emirates will restart passenger services to Mauritius (MRU) this summer with 2X-weekly flights from July 15, as the island-nation gradually re-opens its borders to international tourists. To serve market demand, the airline has also announced it will deploy its Airbus A380 aircraft MRU starting Aug. 1. The route will initially be operated using Boeing 777-300ERs.

Vistara has inaugurated its non-stop flights between Delhi (DEL) and Tokyo Haneda (HND). The first service departed on July 7 as part of an air bubble agreement between India and Japan. The airline will operate the route once a week using its 787-9s. Flights depart DEL on Wednesdays at 3 a.m. and arrive in HND at 2.50 p.m. The return leg departs on Thursday at 5.50 p.m. and returns to Delhi at 11.35 p.m.

S7 Airlines has started flying between Moscow Domodedovo (DME) and Pula (PUY) in Croatia. Flights are initially on Sundays until July 15 when Tuesday and Thursday service is added. Departure from DME is at 11.30 a.m., arriving in Pula at 1.50 p.m. The return flight departs 2.45 p.m. and arrives in Russia’s capital at 6.50 p.m.