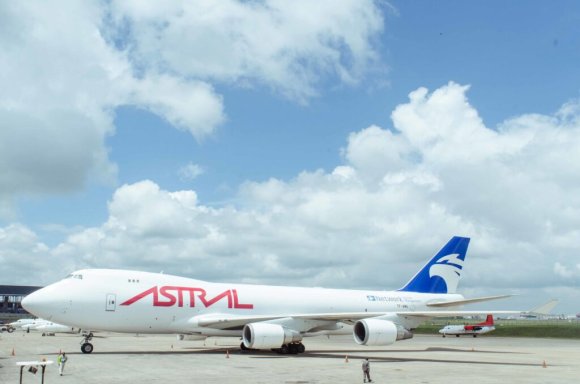 The air cargo market in Africa is primed for a “very high level of growth” over the coming years following the launch of the African Continental Free Trade Area (AfCFTA) and new trade flows that have emerged since the onset of the pandemic, according to the CEO of Astral Aviation.

Speaking at TakeOff Cargo, Sanjeev Gadhia said the suspension of many passenger services since the COVID-19 crisis began has resulted in an upsurge in demand for cargo flights, helping the Kenya-based airline to record the best annual results in its 20-year history during 2020.

“We carried the highest amount of cargo ever and our revenues were significantly better compared to previous years,” Gadhia said. “I’m truly grateful that we had this opportunity when the rest of the aviation industry was on its knees—but it’s something we had to do.

“Africa is the most disconnected continent in the world, and we wanted to make sure that we were getting to as many destinations as possible, whether to carry vaccines, e-commerce cargo or PPE. We made a commitment that no country in Africa would be left behind.”

Gadhia expects the region’s market to continue on an upward trajectory, fueled by the launch of the AfCFTA in January 2021. The free trade area involves 54 of the 55 African Union nations, establishing a single market for African goods and services, and eliminating tariffs by 90%.

“It will mean that African countries will start trading more with each other—currently only about 30% of the continent’s trade is intra-Africa,” Gadhia said. “This will have a very big impact on the air cargo market and so we’re very optimistic about the growth of the sector.”

Gadhia revealed that Nairobi-headquartered Astral therefore plans to target more airports in Western Africa and intends to set up a hub in Togo. The airline will also increase its network in southern Africa, with Gadhia adding that 70% of its expansion would be inter-Africa.

As well as the potential for more flying within its home continent, the airline is also exploring expansion opportunities in the Middle East and Asia. The carrier commenced a Nairobi (NBO)-Dubai Al Maktoum (DWC)-Hong Kong (HKG) route in early July and will “very shortly” begin service to Tel Aviv.

“Hong Kong is very important to us because it’s a gateway, but we’re also looking at flying to new airports in China,” Gadhia said. “If any Chinese airports would like to reach out to us, please feel free to do so. We’re going to have a very major expansion into China in the second half of this year going into 2022.”

Astral is among the airlines signed up to UNICEF’s Humanitarian Airfreight Initiative—an agreement to support the prioritization of delivery of COVID-19 vaccines, essential medicines, medical devices and other critical supplies to respond to the pandemic.

The airline currently operates a fleet of six aircraft, including two Boeing 727-200Fs, one 747-400F and one 767-200F. In May, the carrier signed a memorandum of understanding with Russia’s Volga-Dnepr Airlines to foster cooperation in the humanitarian sector.