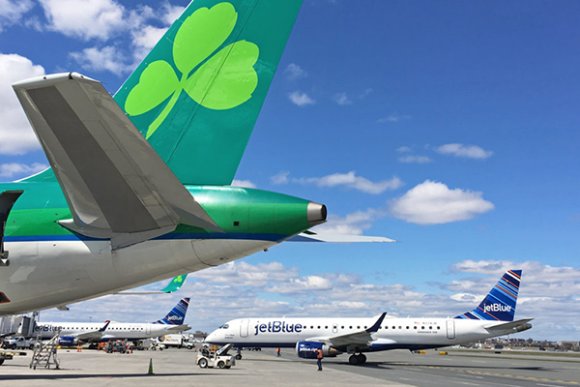 Irish carrier Aer Lingus has applied to the US Transportation Department (DOT) to expand its existing codeshare partnership with JetBlue Airways.

The two airlines began codesharing in April 2013, enhancing an agreement that had linked the carriers’ networks at New York John F Kennedy (JFK) and Boston Logan (BOS) since 2008.

The latest request seeks authority to display JetBlue’s B6 code on flights operated by Aer Lingus Ltd from any point or points behind any member state in the European Union, via any points in the EU, and via intermediate points to any destination in the US and beyond.

The application comes as JetBlue prepares to launch its maiden transatlantic flights. The New York-based airline is scheduled to begin service from JFK to London Heathrow (LHR) from Aug. 11.

A second route from the carrier’s New York home to London Gatwick (LGW) will start in September, with both services to London operating daily on-board Airbus A321LRs.