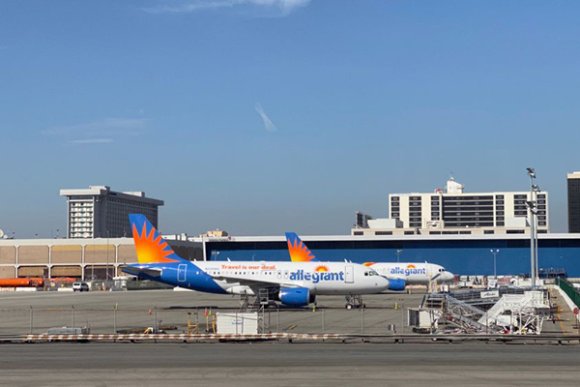 US ULCC Allegiant Air plans to open two new crew and aircraft bases in Michigan and Wisconsin during early 2022 as its capacity continues to exceed 2019 levels.

During the first quarter of 2022, the Las Vegas-based airline is opening new bases in Appleton (ATW), Wisconsin, and Flint (FNT) in Michigan. Allegiant described the airports as “linchpins in its growth strategy.”

The leisure-focused airline is investing $75 million to base three Airbus A320 aircraft and 89 employees at FNT. Allegiant launched operations from the airport in 2016, and at that time the airline represented 7% of the airport’s traffic. Now Allegiant’s traffic share at FNT is 54%, airport CEO Nino Sapone said.

Prior to the opening of the base, Allegiant will launch a new service from the airport this year. Flights from FNT to Phoenix-Mesa (AZA) will begin on Nov. 18; frequencies for the route were not disclosed.

Allegiant’s planned investments for its new base at ATW is $50 million. The ULCC aims to base two A320s and 66 employees at ATW, where Allegiant has operated since 2008.

Specific routes from the bases have not yet been announced.

In addition to the plans for early 2022, during the fourth quarter of this year Allegiant is adding 22 new routes from numerous destinations in its network.

Allegiant was the first US carrier to return to pre-pandemic capacity levels and is expecting growth of 16% to 20% in the third quarter compared with 2019. For the second half of 2021, its capacity growth should reach 18% versus 2019.