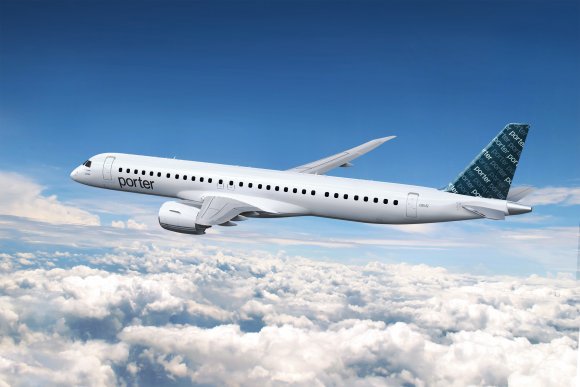 Porter Airlines CEO Michael Deluce said the Toronto-based airline will emphasize transcontinental routes connecting destinations within Canada and Canadian cities with US cities when it begins taking delivery of Embraer E195-E2 aircraft in the second half of next year.

In July, Porter revealed plans for a major network expansion starting in 2022 after confirming an order for 30 E195-E2s and purchase rights for 50 more. The carrier did not list specific planned E195-E2 routes. The airline, which restarted operations earlier this month from its Toronto Bishop (YTZ) base after a long COVID-19-related grounding, is currently an all-De Havilland Dash 8-400 operator with 29 of the type.

Speaking to Routes, Deluce said flights to Mexico and the Caribbean will be a “smaller focus” of the E195-E2 fleet. Most of the E195-E2s—for which Porter will be the North American launch customer—will fly “transcontinental across Canada and the US,” Deluce said. “There’s room for this product at a low cost structure.”

He said Porter will not compete with the likes of Air Canada and WestJet on price on the routes operated by the Embraer jets, but Deluce believes many passengers will choose Porter’s service over its competitors if flight ticket pricing is equal.

The Porter E195-E2s will be based at four Canadian airports: Halifax (YHZ), Montreal (YUL), Ottawa (YOW) and Toronto Pearson (YYZ).

Even though Porter will start flying out of YYZ for the first time with the E195-E2s, YTZ “will always remain core to our operations,” Deluce said. He added that the company’s headquarters will remain at YTZ and the carrier plans to continue flying a robust regional flight schedule from the downtown Toronto airport.