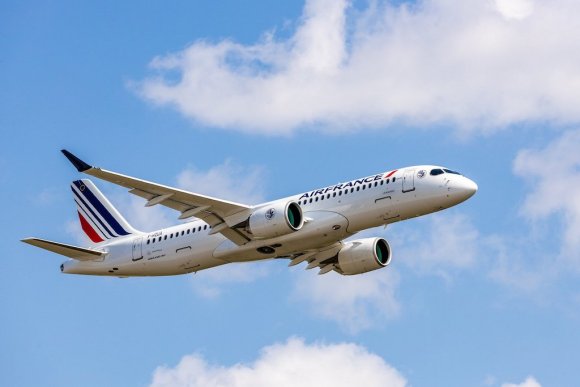 Air France’s maiden A220-300 flights will begin at the end of October, with five destinations set to receive service from Paris Charles de Gaulle (CDG).

The airline intends use the aircraft on routes to Barcelona (BCN) and Madrid (MAD) in Spain; Berlin (BER) in Germany; and Milan Linate (LIN) and Venice (VCE) in Italy. The first commercial services will begin on Oct. 31.

The SkyTeam alliance member’s A220 network will gradually be expanded during the winter 2021/22 season to include Bologna (BLQ) and Rome (FCO) in Italy; Copenhagen (CPH) in Denmark; and Lisbon (LIS) in Portugal.

“This new aircraft with an unparalleled energy performance represents a major asset for Air France,” Air France-KLM CEO Ben Smith said. “To date, fleet renewal is the main source of reducing CO2 emissions, and this is why we are continuing to invest in latest-generation aircraft.”

Air France took delivery of its first A220-300—which it described as the “latest jewel in the fleet on its short and medium-haul network”—on Sept. 29. The aircraft has 148 seats configured in a single-class layout.

Once Air France begins A220-300 service, it will become the third European airline to operate the type alongside Latvia’s airBaltic and Switzerland flag-carrier Swiss. Data provided by OAG Schedules Analyser shows that airBaltic this week (w/c Sept. 27, 2021) offers 82 routes using A220s, while Swiss serves 89 routes with the aircraft.