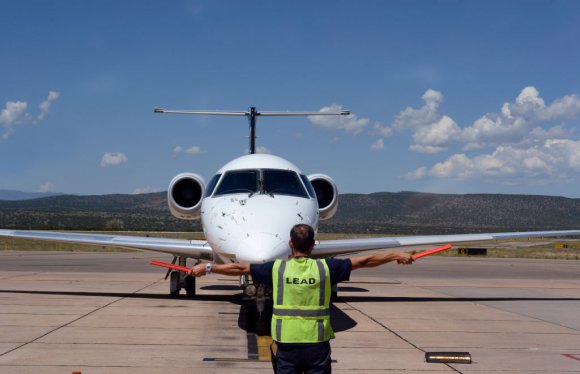 ExpressJet Airlines, the US regional airline that shut down in September 2020, will relaunch operations under the brand “aha!” from Oct. 24.

The leisure-focused brand—aha! stands for “air-hotel-adventure"—will operate from a base at Reno-Tahoe International Airport (RNO) in Nevada to eight destinations within 1-2 hours flying time. The airline will use Embraer ERJ-145 aircraft.

“As ExpressJet began developing post-COVID flying opportunities that fit our history of serving smaller communities with regional aircraft, we realized that the old adage of ‘getting there is half the fun’ has become ‘just getting there burns up half the vacation,’” ExpressJet CEO Subodh Karnik said. “With so many underserved communities and the allure of Reno-Tahoe, the aha! brand model practically leapt at us.”

ExpressJet said it will “soon” partner with resorts, casinos and attractions to sell bundled vacation packages.

The new operating strategy—flying under an independent brand—is a departure from the contract flying ExpressJet did for the 33 years it operated before ceasing flights last year.  ExpressJet, which has its corporate headquarters in Atlanta,  operated flights under the Delta Connection, American Eagle and United Express brands. The carrier was formerly a subsidiary of SkyWest Airlines, the largest regional carrier in the US. SkyWest sold off ExpressJet in late 2018. KAir Enterprises is now the carrier’s majority owner.

By 2020, ExpressJet was only flying for United Airlines, for which it operated 77 aircraft. United decided to consolidate ERJ-145 flying with CommutAir, and ExpressJet ended commercial operations. United has ownership stakes in both CommutAir and ExpressJet.

In August, the US Transportation Department issued a final ruling stating that ExpressJet is “fit, willing and able to conduct interstate air transportation” as a US-certificated air carrier, clearing the way for the airline’s relaunch.