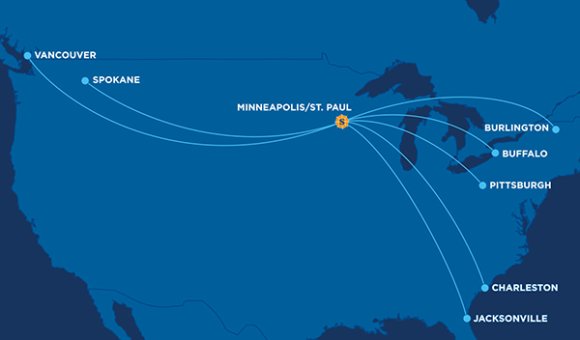 Two of the seven routes will begin in April 2022, with the remaining five starting in June.

The first to launch will connect MSP with Charleston (CHS) from April 7, followed by flights to Jacksonville (JAX) starting a day later. Both will operate twice a week.

Sun Country will compete with Delta Air Lines on the MSP-JAX sector but will be the sole operator of MSP-CHS flights. Minneapolis-St Paul has been without a nonstop scheduled link to Charleston since Frontier Airlines ended service in November 2018.

From June 2, Sun Country plans to begin flights to Pittsburgh (PIT), followed by Buffalo (BUF) and Spokane (GEG) on June 9. Vancouver (YVR) joins the LCC’s network on June 15, with Burlington (BTV) launching the next day. All five of the routes will be 2X-weekly.

Data provided by OAG Schedules Analyser shows that Delta currently serves Pittsburgh and Spokane from Minneapolis-St Paul and is scheduled to resume flights to Buffalo and Vancouver in April 2022.

As well as launching the new routes, Sun Country said flights to New Orleans (MSY) would resume on April 7 with four flights per week, while Savannah/Hilton Head (SAV) will restart on the same day with 2X-weekly services.

A 2X-weekly route to Milwaukee (MKE) also resumes on June 2, while flights to Asheville (AVL) will now continue year-round. Both routes are 2X-weekly.