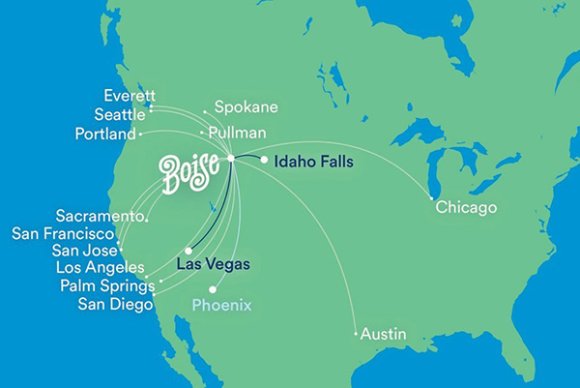 Alaska Airlines is launching two more routes from Boise in the state of Idaho, taking the total number of destinations served from the city to 15 by next summer.

Starting on June 16, 2022, Boise Airport (BOI) will receive nonstop connections to Idaho Falls (IDA) and Las Vegas (LAS). Both routes will be served daily using Q400s on BOI-IDA and Embraer 175s on BOI-LAS.

Analysis of OAG Schedules Analyser data reveals that Allegiant Air and Southwest Airlines each serve BOI-LAS, operating 2X-weekly and up to 3X-daily respectively. However, BOI-IDA has been unserved nonstop since 2012.

Starting Nov. 19, Alaska will also begin flying daily nonstop service from Boise to Phoenix. Originally scheduled for seasonal flying during the winter, the route will now be operated year-round.

Details of Alaska’s expansion from Boise were announced as the oneworld alliance member released its third quarter (Q3) financial results, which showed net income of $194 million for the three months to Sept. 30. This compares with a loss of $431 million in the third quarter of 2020.

“We are thrilled to return to profitability this quarter, leading the industry with a 12% pre-tax profit margin,” CEO Ben Minicucci said. “We're all feeling the momentum and look forward to building on our strong foundation for growth in 2022 and beyond.”

Alaska is currently offering almost 930,000 weekly seats across its network—about 83% of the capacity offered at this time in 2019.