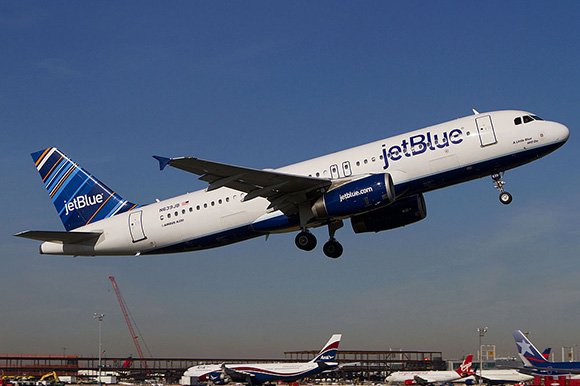 New York-based JetBlue said its ability to grow in the New York market is contingent on NEA standing. DOJ and six US states last month filed an antitrust lawsuit against American and JetBlue seeking to end their NEA grouping, alleging it threatens competition in domestic and transatlantic markets.

The two airlines launched the partnership from the Boston and the New York metro areas in February after outgoing Transportation Secretary Elaine Chao approved the deal the previous month. The NEA allows the coordination of schedules at Boston Logan (BOS), New York Kennedy (JFK) and New York LaGuardia (LGA) airports.

“New York, a capacity-constrained region, has historically been dominated by just two carriers [Delta Air Lines and United Airlines],” JetBlue CEO Robin Hayes, speaking to analysts and reporters Oct. 26, said. “And in Boston, our alliance is enabling JetBlue to expand our low fares and superior products to new markets and create a broader . . . network. This alliance in no uncertain terms has supercharged competition in the region . . . We are fully committed to this alliance and to delivering the tremendous benefits of added competition.”

JetBlue and American plan to operate nearly 500 daily flights as part of the NEA in November, 300 of which will be flown by JetBlue. Hayes said JetBlue is “in the process of hiring 1,800 new crew members as a direct result of the growth the NEA is enabling for us, jobs that otherwise wouldn't be created without this alliance. We are very confident that the NEA will be extremely successful.”

JetBlue President and Chief Operating Officer Joanna Geraghty added: “This alliance, above all, is about growth—JetBlue's growth that would not otherwise be possible. We are bringing more low fares, a greatly enhanced network and schedule and more seats to the Northeast. Together with American, we have already launched 58 new routes out of the Northeast and added frequencies on more than 130 routes, and we will expand through next year, including to 18 new international destinations.

“Our growth in the Northeast has already provoked a competitive response from the entrenched legacy carriers that have long dominated in the region and who stand to benefit the most from the absence of a viable third competitor in the region. And it's frankly making JetBlue . . . a far more relevant competitor in this region with a much bigger network.”

JetBlue executives argued that, without NEA, Delta and United will dominate the New York region, driving up fares for passengers. “We are going to bring a viable third competitor to this region—more seats, more routes, lower fares, better service,” Chief Financial Officer Ursula Hurley said. “This unlocks tremendous growth opportunities for JetBlue in our [home] geography that we would not have otherwise had.”

Hayes concluded: “NEA, again, is effectively enabling JetBlue to increase our presence in New York by nearly 50%. That is extremely significant from a network relevance point of view. That is very important in terms of being more attractive to corporate flying.”

JetBlue operated 99% of its pre-COVID-19 pandemic capacity in the 2021 third quarter. “We do envision full year 2022 [capacity] to be up versus 2019,” Hurley said. “And we expect that capacity to ramp up progressively as we navigate through the year depending on the shape of the recovery.”

But she cautioned: “We live in a fluid environment . . .  I think an overarching comment is that we're still not in the new norm. So, the operation is still very fluid, and it hasn't yet settled down.”