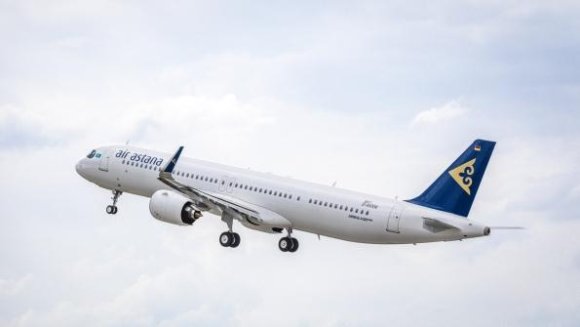 Air Astana announced a net profit of almost $5 million for the first six months of 2021, recovering from a loss of some $66 million for the January-to-June period of 2020. Is this turnaround down to domestic traffic? Yes, our recovery is significant and the domestic market is now, I believe, the fastest-growing in the world. In the first six months of 2021, compared to 2019, IATA figures report a global contraction of 25%. Domestic growth in China and Russia is reported, respectively, as 6.9% and 10%. However, here in Kazakhstan growth is tracking at 37%. Our LCC FlyArystan, established in 2019, is performing extremely well and presently growing at more than 1,000% year-on-year in terms of passenger numbers. We have always had an aggressive growth plan for FlyArystan, which is being vindicated. It now operates 10 Airbus A320s, planned to increase to 17 by early 2023. In addition to domestic routes, FlyArystan is also operating internationally to Sharm El Sheikh (SSH) in Egypt, Kutaisi (KUT) in Georgia, Istanbul´s second airport Sabiha Gokcen (SAW), Osh (OSS) in Kyrgyztan and Tashkent (TAS) in Uzbekistan. Flights to Sharjah (SHJ) are planned for the winter season. I expect FlyArystan will transport 3.4 million passengers this year—more, in fact, than Air Astana, albeit at much lower yield.

What are the other pillars of Air Astana‘s recovery? Restricted capacity on regional routes as a result of government action to reduce the spread of COVID-19 has meant a sup-ply/­demand imbalance on key routes, such as to Moscow, Kiev, Tashkent, Tbilisi, Bishkek and Dushanbe. The result has been much higher load factors and yields than we are used to on these routes. There is also the strong performance of lifestyle routes, to the Maldives, Sri Lanka, the Red Sea, Dubai, Antalya, Bodrum, Montenegro. This continues to be the case as there are only limited restrictions applied to Kazakh nationals wishing to travel abroad. We call them lifestyle routes because people seem increasingly willing to travel for long stays out of traditional seasons and to run their businesses, and even educate their children, remotely. I would say this is one of the more remarkable unexpected consequences of the pandemic. On the cost side, the early termination of the entire Embraer 190 and Boeing 757 fleets has brought huge operational savings and greater fleet efficiency. We replaced these with Embraer E2s and the Airbus A321LR. The airline is therefore more efficient than it was before COVID, and—at the risk of becoming a hostage to fortune—we anticipate that the remainder of 2021 will be strong.

Air Astana operates two hubs, in Almaty (ALA) and Nur-Sultan (NQZ). Will you continue the dual-hub concept? Both of our main bases are performing well, however we no longer refer to them as “hubs” because we are now operating an exclusively point-to-point traffic model. Sixth-freedom business, which generated 26% of revenue in 2019, is now down to zero. Also, nonessential business travel—internal meetings, trade fairs and so on—seems to have disappeared. Actually, we are OK with a point-to-point model as it is higher yield and easier to manage. It seems to us that people don’t want to transit anymore and much prefer direct flights, perhaps driven by differing PCR test, vaccine, health and visa regulations, all varying according to which country or with which airline one is flying. Navigating a family on a multi-flight hub-and-spoke itinerary can be something of an obstacle course, to put it mildly.

Do you think the recovery for the hubs system is more difficult? Ultra-efficient hub-and-spoke airlines such as Singapore Airlines and Emirates, for example, will find a way to make transfers simpler. Other than that, many airline managers who have traditionally relied on sixth-freedom business for a portion of their revenue—without necessarily having the efficiencies and simplicities of the super-connectors and who may be hoping for its return—will in my view be disappointed.

How is your Airbus A321LR fleet performing? The LR is doing a great job. We have six with four more on order between now and the middle of next year. Customers love the comfort in both business and economy classes and the economics are good, with fuel burn around 50% less than a 757 on a long-haul flight with the same configuration of 16 business and 150 economy seats. In terms of capacity, all 36 aircraft are presently flying, including the 10 A320s for FlyArystan. While the A320 family is the backbone of the operations, both the 767s and E2s have an important niche role to play.

What is the main challenge for Air Astana now? Infrastructure and airport slots, and services at local and foreign airports, which continue to be tight. During the pandemic many airports laid off staff, and we are suffering the consequences of that short-termism as traffic returns. Employment generally is a huge challenge for the industry as cuts executed in panic mode in mid-2020 have reduced resource and skill levels critically as the business has recovered. We ourselves terminated 120 short-term foreign pilot contracts and have already rehired 50 of them. However, we made no employee on a full-time contract redundant anywhere on the Air Astana network, instead opting for a temporary downtime scheme on 50% pay. And we are very glad we did it that way because now we pretty much need everyone. In certain parts of the business—IT, digital marketing, areas of that nature—it is hard to find people as they are in massive demand. We have a young population in Kazakhstan. Our economy significantly transitioned to digital during the last five years and, although we are regarded as the top-brand employer, competing for high-quality technically skilled staff is a challenge.