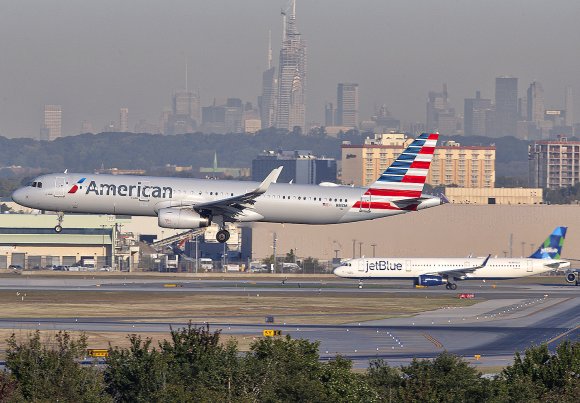 American Airlines is defending the Northeast Alliance (NEA) launched this year with JetBlue Airways and projects that the “full benefits” of the carriers’ partnership will be realized in 2022.

Last month, JetBlue executives offered a vigorous defense of the NEA, saying it allows JetBlue to grow in the New York market and provides competition for Delta Air Lines and United Airlines—the carriers that have traditionally dominated the New York market.

In a statement released this week, American detailed how many new routes the NEA has enabled and defended the alliance, which has been heavily criticized by other airlines and is the target of an antitrust lawsuit filed by the US Justice Department.

“The NEA is open for business, providing [passengers] the most frequencies in New York, the best routes across key business markets and reciprocal status benefits,” American chief revenue officer Vasu Raja said. “With lie-flat seats offered in all transcontinental markets and a robust international network that includes the launch of 10 new routes, the NEA is spurring competition in New York and transforming travel beyond the northeast.”

American said the NEA operates to 60 markets from JFK and LGA and to 49 markets from BOS. “In December, American and JetBlue will offer lie-flat seats on all transcontinental routes from New York and Boston, offering the most lie-flat seats of any airlines for a premium travel experience from the Northeast,” according to American.

The NEA will enable the launch of 18 new international routes next year, American said.

“JetBlue [has] added its code to several international flights on American’s network and continues to add its code to further domestic and international flights,” American said. “[Passengers] can now easily connect from an American flight to a JetBlue flight and vice versa through New York JFK as the two airlines are now offering codeshare connections to nearly 600 origin and destination markets.”

Overall, the NEA has enabled the launch of 58 new routes and the two airlines have increased frequencies on more than 130 routes. American and JetBlue now codeshare on 175 routes.

“The NEA has also created reciprocal codeshare on the largest connecting markets from JFK,” American said, adding: “Bolstered by the NEA, American is currently the fastest growing international carrier in New York. The alliance connects the Northeast to almost 150 worldwide destinations, including 10 new international routes from American.”

American is particularly touting JFK service to Delhi (DEL), which will launch Nov. 12 and mark American’s return to the Indian capital after a nearly 10-year absence.

“We are revamping the high-frequency travel experience to meet the needs of today’s business customers,” Raja said. “That means creating an easy and seamless travel experience that has the amenities they want, the flexibility they need and a network that offers access to any destination they want to go.”