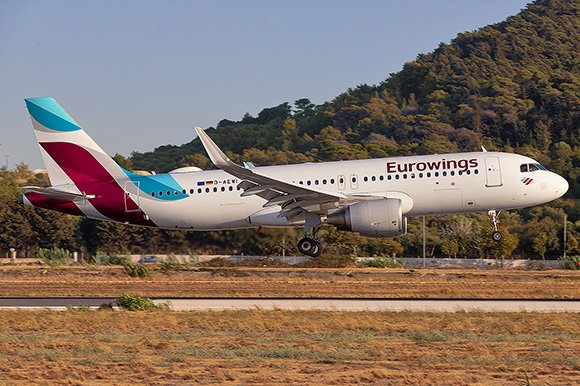 Four destinations in Norway, Finland and Sweden that are famed as viewing points for the colorful Northern Lights are to receive new seasonal routes from Lufthansa subsidiary Eurowings.

The airline plans to fly to Tromsø (TOS) in Norway and Rovaniemi (RVN) in Finland from Düsseldorf (DUS) in Germany, and to Kiruna (KRN) and Luleå (LLA) in Sweden from Stuttgart (STR) in Germany.

From Düsseldorf, Eurowings’ largest base, the LCC will take off for Tromsø for the first time on Dec. 4. The city lies 344 km (214 mi.) north of the Arctic Circle, at the latitude of northern Alaska. Flights will be offered every Saturday using Airbus A319 aircraft, with a Tuesday service starting as of Dec. 21.

Also from Düsseldorf, the carrier will be flying to Lapland’s capital Rovaniemi on Sundays beginning Dec. 5. The city is near the Arctic Circle, a little further south than Tromsø, and known for being the home of Santa Claus. In addition to these regular flights, Eurowings will offer additional service to RVN on Dec. 23 and 30, and on Jan. 4 and 6.

Flights from Stuttgart to Kiruna, the northernmost city in Sweden, start on Dec. 18 and will be available once a week on Saturdays. As well as being a tourist magnet for the Northern Lights, Kiruna attracts winter sports enthusiasts and travelers staying in the ice hotel in Jukkasjärvi, which is rebuilt each year.

The second new route from Stuttgart to Luleå will start on Dec. 19 and be served on Wednesdays and Sundays. Like Kiruna, Luleå in the north of Sweden offers leisure experiences such as snowmobile safaris and aurora tours.

The seasonal network additions come as Eurowings continues to grow its presence in Scandinavia. The airline will open a new base in Stockholm Arlanda (ARN) in March 2022, stationing five A320s in the Swedish capital.

Stockholm will become the 11th Eurowings base in Europe and the fifth outside its home market of Germany after Palma de Mallorca (PMI) in Spain, Prague (PRG), Pristina (PRN) in Kosovo and Salzburg (SZG) in Austria.

Earlier this week, Eurowings parent Lufthansa said it plans to offer about 80,000 additional seats on 440 extra flights for the upcoming holiday season and the New Year across its group of airlines. From its hubs in Munich (MUC) and Frankfurt (FRA), Lufthansa is offering more than 120 additional flights with a capacity of 25,000 seats during the Christmas period.